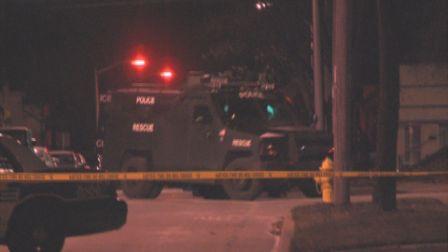 A SWAT Team was called to West Milwaukee overnight after neighbors reported hearing gunfire in their residential neighborhood. Calls starting coming into West Milwaukee Police just after midnight Thursday morning according to officers on the scene.

Police say they determined the gunfire was linked to occupants of a home near 55th and Lapham St. They tried to make contact with the people inside over the phone and by knocking on the door but there was no answer.  Out of caution, officers called for backup from the Milwaukee County Sheriff's Office.  A tactical team responded to the home and some of the neighborhood was blocked off.

After some time had passed and without any response from inside officers decided to breach the front door. A man and a woman were found inside uninjured. They were both taken into custody for questioning.

At this point it is not clear who was firing the shots outside the home or why. West Milwaukee Police say they continue to investigate.