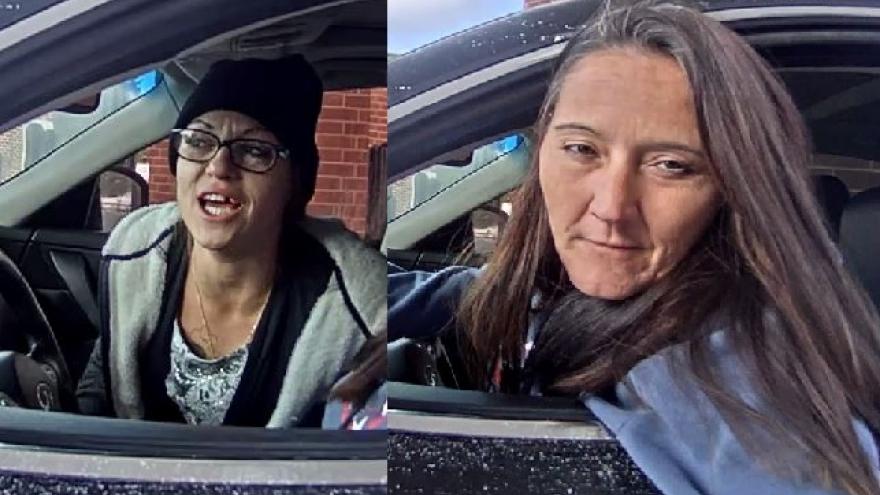 MUSKEGO, Wis. (CBS 58) -- Muskego Police have identified the suspects in the case. Both women are Florida citizens and identified as 38-year-old Nicole Ryan and 30-year-old Tiara Andrade.

The suspects were driving through Kentucky and tried to get more cash using stolen means.

After a chase and crash both suspects were arrested.

MUSKEGO, Wis. (CBS 58) -- Muskego Police have released more identifying information about a woman and her partner who are accused of cashing stolen checks with stolen drivers licenses.

The two women tried to cash stolen checks on Wednesday, January 3, but when the teller became suspicious they drove off.

New information about the woman in the passenger seat reveals that she's missing her top left tooth (lateral incisor) and has a tattoo on her right chest that stretches across her sternum. The tattoo appears to have clouds on the top.

The suspect was wearing an Apple Watch and appears to have an iPhone with a blue cover on it.

Police believe both suspects may be part of a gang called "Felony Lane". Felony Lane is a nationwide gang that often steals items from cars and then assumes identities to gain cash at banks.

Authorities are still hoping to identify the women. If you recognize them or have any information you are asked to call 262-679-4130.

MUSKEGO, Wis. (CBS 58) -- On Wednesday, January 3 around 12:50 p.m. two women drove up to the drive through lane of Summit Credit Union on Moorland Road in Muskego in a dark colored Infiniti SUV.

The passenger gave the clerk a drivers license which had been reported stolen three weeks earlier. One check to the women was cashed for $1,800 and then the suspect tried to cash another check but the teller became suspicious and the car drove off.

Investigators learned that additional checks for similar amounts were just cashed from the Summit Credit Union in Franklin.

Police believe the suspect stole multiple checkbooks from multiple victims and wrote checks to the name on the drivers license to cash them.