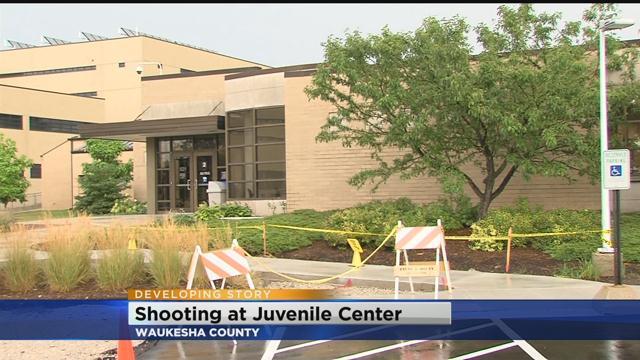 A scuffle at the Waukesha County Juvenile Center ends with an officer involved shooting, and in this case, a juvenile was not involved.

The Waukesha County Sheriff's Office says the 34 year old man was there for a court hearing, but things got violent quickly when he tried take the deputy's gun.

\"We had some information that caused the deputy concern and he simply wanted to make contact with the individual and talk with him. And it was at that point that the person rushed the deputy and attempted to disarm him,\" said Waukesha County Sheriff Eric Severson.

Trouble started when the 16 year veteran of the Waukesha sheriff's department asked to speak to the man privately in a conference room.

\"The preliminary investigation shows the male suspect tired to disarm the deputy.  It was during that struggle the deputy's gun went off and the suspect was shot in the leg,\" he said.

\"The deputy in this case was able to fend off the attack to the extent he could and was able to make sure he wasn't injured and in the process the subject fired the weapon at least that's our understanding at this point,\" he said.

He says it started and ended quickly and no one else was hurt.

\"The contact between this individual and the deputy happened in a conference room so it was isolated in this building and really just the deputy and suspect in this room,\" he said.

The suspect was transported to Frodtert and the  44 year old deputy is now on paid administrative leave while the investigation continues.

The suspect's condition is unknown. Waukesha Police and the district attorney are leading the investigation into what happened.