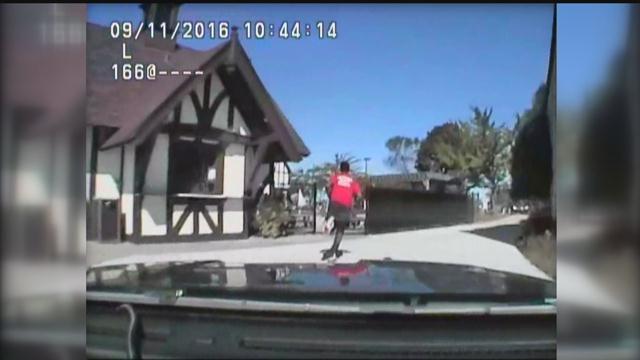 With his sirens on, Elm Grove Police Sergeant Ryan Unger speeds west on Bluemound Road, chasing a car not even in his view.

Just minutes before, Unger said he witnessed the car, at the intersection of Bluemound and Underwood Crossing Parkway, use a restricted lane for buses and bikes to speed past an SUV.

But instead of pulling over, police said Marquis King, 19, took off.

Dash cam video shows the squad car eventually catch up to King near Bluemound and Moorland, where he's is trying wedge his car between two others stopped at the light. King drives off when the light turns green.

Another officer chases the car into the nearby Westmoor Country Club, where the suspect jumps out and runs. Police said he was armed with a loaded gun.

Video from a second squad car shows King heading toward the golf course, not sure which way to turn.

"I can drive all day long," said the officer.
When he doesn't outrun the police car, King goes into the fenced swimming pool area, where officers say he ditched the weapon.

Police say the suspect then jumped a fence and crawled under a car at the Brookfield Square Mall parking lot.

Ignoring commands to stay on the ground, King is accused of running away again, but this time he'd be caught. Sgt. Unger arrested King near Sears.

Police found marijuana and cocaine inside the car. King faces at total of five charges in case.

A $1,500 dollar cash bond was set Monday at Waukesha County Court, where King will be back for a preliminary hearing on September 21.