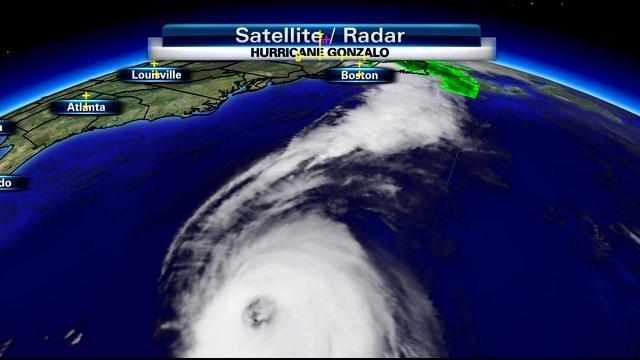 It's a double threat. Hurricanes are barreling through the ocean on both sides of the continental United States. Hurricane Gonzalo on Friday slammed the British territory of Bermuda in the North Atlantic Ocean. Hurricane Ana is heading for the Hawaiian Islands and could cause trouble over the weekend.

Hurricane warnings were posted on Bermuda as Gonzalo raged through the region. The powerful Category 3 storm battered the island with wind gusts that topped 115 miles per hour, according to the National Hurricane Center in Miami, as it moved in a northeasterly direction at 16 miles per hour.

The eye of the storm was forecast to pass over Bermuda late Friday, the agency said.

But the island is ready. \"Bermuda we are prepared,\" said Premier Michael Dunkley. \"Well-rehearsed plans for most contingencies are enacted, and as we hope for the best, we are prepared for the worst.\"

Ahead of the storm, Bermuda closed schools, shut down bus and ferry service, and opened up shelters.

Forecasters predicted Gonzalo will weaken to as it moves past Bermuda and pushes into the North Atlantic by Saturday.

In 2003, Hurricane Fabian caused more than $300 million in damages. It also knocked out power to most of the island.

In the Pacific Ocean, Hawaiians are hunkering down, preparing for the approach of Hurricane Ana.

The storm strengthened into a Category 1 storm Friday afternoon with maximum sustained winds of 75 miles per hour, according to the Central Pacific Hurricane Center in Honolulu.

A tropical storm watch is posted in some areas, meaning sustained winds of 39 to 73 miles per hour are possible within 48 hours.

The storm was about 230 miles south of Hilo late Friday afternoon, the agency posted on its website.

Ana is expected to approach the Big Island by Saturday as a Category 1 hurricane, but it's unlikely to make actual landfall, according to some forecasters.

Abercrombie declared a state of emergency earlier this week in advance of Ana's arrival. The emergency proclamation \"allows us to respond quickly to any potential impacts,\" he said.

Ana could cause dangerous surf conditions, coastal flooding and mudslides as it moves through the region. Some areas could see up to the 8 inches of rain with as much as 12 inches in isolated areas.

Hurricanes are a rare occurrence in Hawaii. Only three storms have made a direct landfall on the islands in the past 55 years, according to the Central Pacific Hurricane Center.

But it's already been an unusual year for Hawaiians, weatherwise. The island chain has already been hit by two damaging tropical storms so far this season.