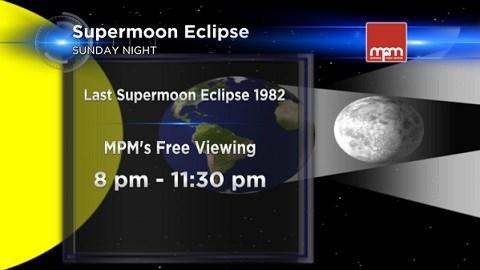 A total lunar eclipse is coming Sunday night!  Our Moon will turn a red-orange color as it orbits through the Earth's dark shadow.  The next lunar eclipse in Wisconsin won't occur until January 31, 2018.

This eclipse is unique because the moon is considered a Supermoon.  It's caused by the elliptical orbit around the Earth.  When the Moon is full and closest to the earth, it's is called a Supermoon.  This type of Moon is 7% bigger than the average full Moon.  It's really not visible to humans, but the tides are stronger.

The last Supermoon eclipse occurred in 1982!  We do expect some cloud cover during Sunday afternoon, but there should be enough breaks to witness the eclipse.  You can head downtown Milwaukee to the Milwaukee Public Museum for a free viewing with their telescopes Sunday night.  The partial eclipse starts at 8:08 pm.  The total eclipse starts at 9:12 pm and lasts until 10:23 pm.