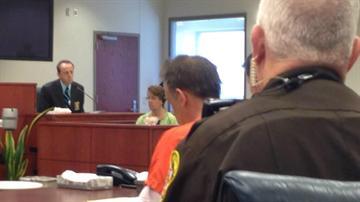 A Walworth County detective took the stand and testified that Zelich told him he caused the deaths of both Laura Simonson and Jenny Gamez.

Zelich confessed to meeting Gamez later in 2012 when she was either 18 or 19 years old. \"They went to a hotel in Kenosha County Wisconsin, and after they arrived they spent days at the hotel,\" said Rucknagel.

Rucknagel also testified Zelich admitted to placing the bodies of Gamez and Simonson in a suitcase, and storing them. Those suitcases were eventually found on the side of a Walworth County highway in early June.

The question in this hearing if Zelich actually tried to hide the bodies. The judge felt there was overwhelming probable cause that was Zelich's intent.

\"You heard the judge in this case. It's simply a matter of hiding a corpse with the intent to conceal a crime,\" says Walworth County District Attorney Dan Necci. \"That's all we were concerned about today was getting bond over on those felonies.\"

Zelich's public defender says he plans to continue defending Zelich if  charges are filed in Kenosha County. He would not comment on this preliminary hearing.