Study finds why women feel cold in the office 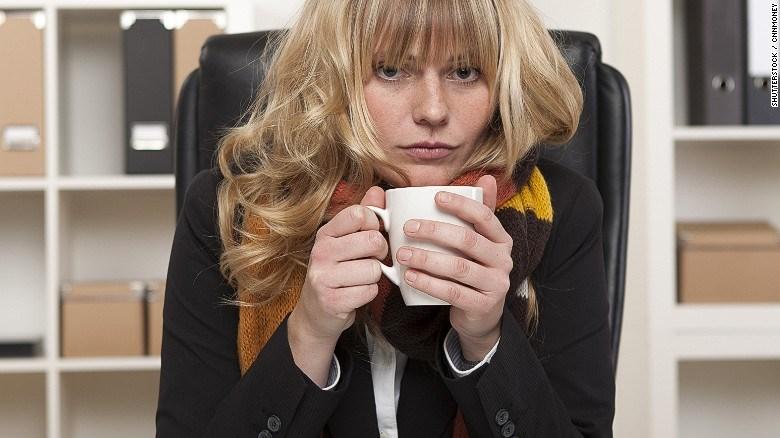 (CNN MONEY) How pervasive is bias against women in the workplace? Well, it's literally in the air.

That's one takeaway from a new study by two European researchers.

Most modern offices use climate control systems based on the metabolic rate of an average 40-year-old man who weighs 155 pounds.

That may have described a typical worker in the 1960s, when this standard was first adopted, but does not anymore.

\"We found that the standards globally -- at least for the metabolic rate -- are based on an average male,\" researcher Boris Kingma told CNNMoney.

Kingma and Wouter van Marken Lichtenbelt, both of whom are at the University of Maastricht Medical Center in the Netherlands, published their research Monday in the journal Nature Climate Change.

The two believe temperature standards should be set according to the \"body composition\" of the people in a particular building or office. That will create the ideal environment for most of the people.

The issue isn't really only about gender but any \"subpopulation,\" like seniors or children, with a different metabolic rate than the 1960s guy used as the standard.

Of course, since women make up 47% of the U.S. workforce, they are the ones you are most likely to see around the office wrapped in shawls and blankets.

\"Women are generally smaller than men and have a higher body fat percentage. So, their metabolic rate is 20% to 35% lower,\" said Kingma, who is a biophysicist.

In a control study of 16 women, the researchers found that the ideal temperature for women was almost 5 degrees Fahrenheit warmer than it is for men.