Study: Acetaminophen use in pregnant women linked to ADHD in kids 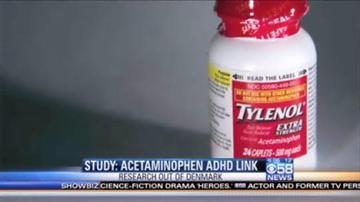 DENMARK -- Acetaminophen is commonly recommended by doctors to pregnant women in minor pain, but a new study has some warnings that everyone will want to hear.

The common pain reliever could be associated with ADHD-like behavioral problems in children..

The study, done in Denmark and published in the medical journal Jama Pediatrics, looked at data from more than 64,000 children.

It says the biggest risk was among women using acetaminophen the most often and later in pregnancy. Researchers found that when a woman used the pain reliever for 20 weeks or more -- their child had a 50 percent increased risk of receiving ADHD medicine later in life.

The researchers said acetaminophen may be interfering with maternal hormones that are critical for fetal brain development.

But an editorial published in Jama emphasized that while the study found \"an interesting observed association,\" it noted that the researchers did not find that acetaminophen causes ADHD, and the study authors agree.

Acetaminophen is commonly found in over-the-counter pain relievers including Tylenol.

Johnson and Johnson, the maker of Tylenol, responded in a statement, saying, \"Tylenol has one of the most favorable safety profiles among over-the-counter pain relievers If pregnant or breastfeeding, the consumer should ask a health professional before use.\"

Many experts say more research needs to be done and of course if a woman has any questions about this, they should talk to their doctor.