Students stand up against violence through anti-graffiti campaign 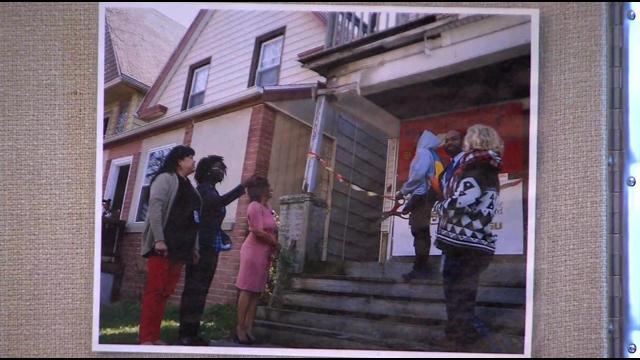 MILWAUKEE-- Photos displayed inside Milwaukee City Hall show students who are working hard to beautify their neighborhood.  The students created pieces of art to cover a neighborhood eyesore in Washington Park, near North 40th and Lloyd.

Members of the Milwaukee Common Council say the students' work transformed a foreclosed home boarded up near North 40th and Lloyd into a symbol of hope for the community.  Their project is part of the kickoff for this year's anti-graffiti campaign.

The theme this year is \"Respect My Neighborhood, Respect Public Art.\"

The campaign is part of the mayor's initiative to build stronger neighborhoods.

Mayor Tom Barrett (D-Milwaukee) says graffiti destroys communities, kills jobs, and encourages criminal behavior.  For the kids who created the works of art, it's about taking pride in their community and sending a powerful message.

\"This neighborhood is more than just violence, gangs, and drugs, there's good things out here,\" said Aldaya McKinney, a seventh grade student, at Westside Academy 2, \"there's more things out here in the world than what people make of us.\"

McKinney is just one of many students involved with the project.

If you spot graffiti in your neighborhood call the complaint hotline at 286-8715 or e-mail graffiti@milwaukee.gov.