Student gets into Stanford after Writing #BlackLivesMatter 100 Times 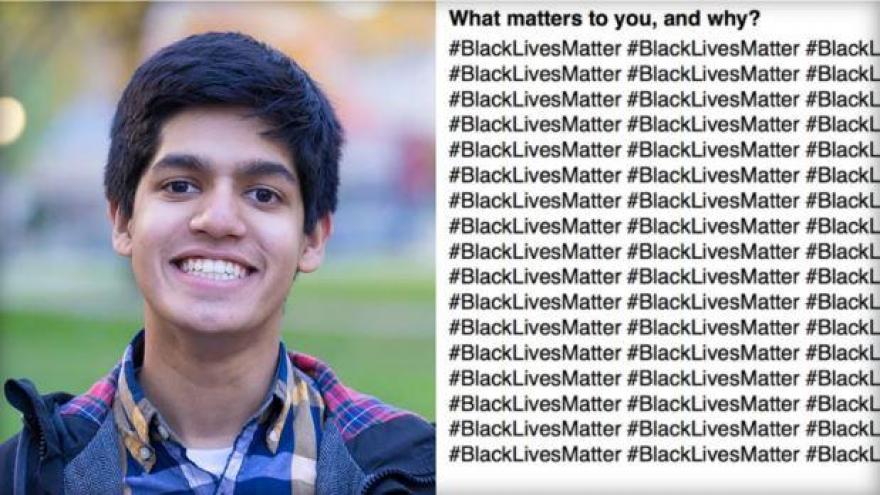 (CBSNews) Ziad Ahmed was filling out his application for Stanford University when he came across a question which he was told to answer in 100 words or less: “What matters to you, and why?”

The possibilities are endless. But to Ahmed, the answer was simple: “#BlackLivesMatter.”

The senior at Princeton Day School in Princeton, New Jersey, believed his answer spoke for itself, and so he decided to write that and only that —#BlackLivesMatter — 100 times.

“When I thought about why, I realized that the insistence on explaining the meaning of the hashtag is inherently problematic and the ‘why’ is embodied in the words themselves,” Ahmed told CBS News in an email Wednesday. “Declaring the humanity and value of black lives is necessitated by the painful reality that the collective humanity is frequently denied when perpetrators of violence enjoy impunity.”

It’s probably not an answer the admissions office sees every day.

The 18-year-old said he wanted to write an application that was “authentic,” something that demonstrated his passion to be a part of making a difference, which includes being an ally with the Black Lives Matter movement.

“I am many things, but I am an unapologetic progressive activist first and foremost,” he said. “To be an ally, to me, means to listen, to show up, and to constructively contribute. That looks like volunteering for organizations that have been on the ground doing change-making, adding my voice to those who are peacefully protesting, amplifying narratives that are grounded in facts not fear, and naming injustice.”

Ahmed was confident the university would respond to his message — and he was right.

On Saturday, the high schooler announced his Stanford acceptance letter, welcoming him to be among its class of 2021, with a single tweet.

“I submitted this answer in my Stanford application, and yesterday, I was admitted,” he wrote, sharing a photo of both his answer and an email from Stanford’s admissions office.

“The attention from this tweet emboldens my desire to learn and understand the history of how we have arrived at this moment,” Ahmed said. “I want to find innovative ways to disrupt and create positive change, to be a constructive and respectful ally, and to be better a person.”

“Stanford has numerous long and short question requirements on its supplemental application, in addition to the primary essay in the Common Application,” Miranda explained. “As the student has reported himself, his response regarding Black Lives Matter was to one of the short-answer questions on the Stanford-specific application, not an essay.”

But Ahmed made his mark long before submitting his Stanford application.

He founded a non-profit organization called Redefy, which seeks to mobilize young people to confront stereotypes, and was honored last year by Business Insider as one of its “15 young prodigies who are already changing the world.”

Ahmed, who is Muslim, was invited to the 2015 White House Iftar dinner, a celebration during the Islamic holy month of Ramadan, where then-President Barack Obama personally thanked him for his activism work.

“As a Bangladeshi-American growing up in New Jersey, he saw early on that there was not enough understanding in the world,” Mr. Obama said. “So two years ago, he founded Redefy, a website to push back against harmful stereotypes by encouraging teens like him — he’s only 16; I think our youngest guest tonight — to share their stories.”

Ahmed started the organization when he was a freshman in high school, at the young age of 14. Since then, he’s traveled across the country to promote a message of unity, encouraging others to stand up for what they believe in.

“Right now, there is a political climate that seeks to divide for political gain that emboldens xenophobic sentiments by propagating false narratives, and it is through actionable steps that we can hope to change that,” Ahmed said.

He hopes his message will help inspire others to disrupt and create positive change.