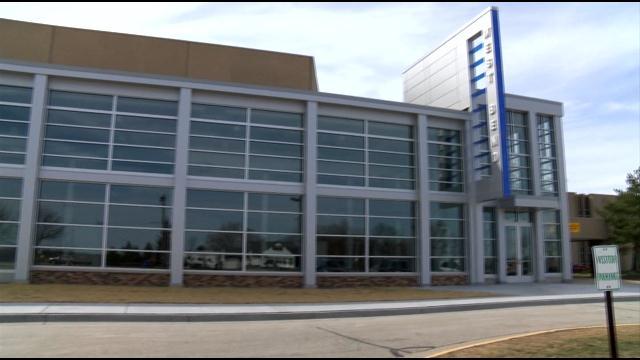 In Josh Zollar's orchestra class, you won't hear Mendelsohn or Beethoven - at least not this week. Instead, you'll hear music from \"I am Not a Pilot.\"

\"Oh, they love the music,\" Zollar said as his students packed up their instruments.

\"Yes, I like to brag about it,\" the junior violinist laughed.

The band and orchestra will join forces inside the newly-remodeled West Bend \"Silver Lining Arts Center\" on the east side of the high school complex.

\"The new [auditorium] is so amazing to play in,\" Jay said. \"The sound's great and just being an arts student, we're very grateful to play in there now.\"

In fewer than four months crews renovated the 45-year-old auditorium with new lighting, speakers, seats and a world-class stage. It cost $3.1 million, but 90 percent game from private donations. Tens of thousands of which student-athletes helped bring in.

Heimark, who plays volleyball and track, is a member of \"Athletes for the Arts,\" a group fellow athlete Andrew Steiner formed in 2014 thanks to some loving prodding from his father. The group fundraised $16,000 from local businesses to pay for Wednesday night's show, which means every ticket sold gets donated to the theater fund itself.

\"It's a big incentive to join the arts program,\" Steiner of the new theater. \"Our arts program is very skilled as it is. Hopefully the trend continues.\"

Athletes for the arts raised close to $15,000 during a show held a year ago, which featured the Plain White T's. The student-athletes expect Wednesday night's show to bring in even more. To \"Athletes for the Arts\", it's a way to give back to a district and student body that's given them -- and their programs -- so much.

\"It's what they deserve,\" West Bend Schools Superintendent Ted Neitzke said outside the Arts Center's huge plated-glass entrance. \"You know they deserve to come to an environment that's empowering and once they're engaged, boy are they going to take off.\"

Tickets are still available for Wednesday night's 7:30 show. Adults are $20 and students are $15, which can be paid at the door.

For more info about \"I Am Not a Pilot\", visit their website here.