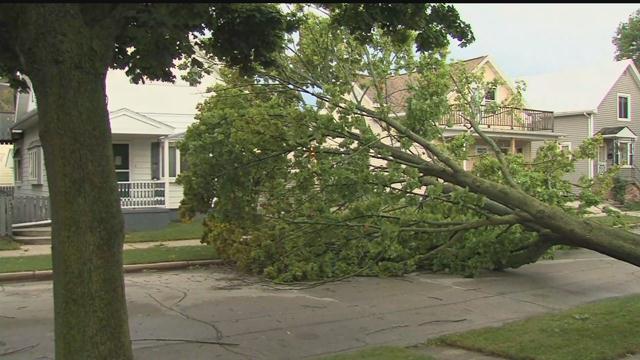 We're standing near the corner of 11th and Pershing in Sheboygan, and this is what we've seen all evening, trees uprooted. The owner of this house isn't home. Aside from getting the tree cleared out, there doesn't appear to be more damage.

Tonight's storm was quick, but intense. An officer told me they have anywhere between 20 to 30 reports of trees down. Take a look here at the tree down on Bluff Avenue. No property damage and no one hurt. The tree only blocking the street.

One resident described what she heard when it came crashing down.

\"I was in my living room and I heard a really loud popping noise...and looked out the window tree is down,\" said Amber Halkin of Sheboygan. \"It was very intense, insane, I had to close the windows real fast because it hit the house real hard and then we heard that happen, and looked to see if everything was alright.\"

We also want to show you some intense moments from the storm this evening shortly after 5:30 when my photographer Jason and I first got to the PGA. The rain and wind picked up within matter of moments. State Patrol wasting no time evaluating people from the property. We spoke with a few PGA goers who say people some even became overheated this afternoon before the storm came our way. They also talked to us about the evacuation.

\"We were watching Tiger hit off hole 12 and we could just see the wind and the clouds therefore everybody just turned and headed out. Hopefully everybody gets home safe,\" said Amy Elder, a golf fan who attended the tournament.

Again, police say they have received nearly 30 reports of trees down. At this time, it appears to be property damage and no injuries.