"With high winds continuing today we are seeing more outages and damage to our network. We expect to have restoration estimates later today when winds subside. Unfortunately repairs in some areas will take a longer period of time and customers should be prepared for an extended outage that could last into the early hours of the weekend," We Energies said in a news release.

"We'll have about 90 to 95 percent of our customers restored by midnight tomorrow night," Kevin Fletcher, the president and CEO of We Energies parent company WEC Group, said in a news conference. "By early Saturday, customers that are still out should have been restored or assigned to their particular outage so that's the plan."

"Trees and limbs can and do fall, which has happened here," Fletcher explained. "[The wind] takes down the lines, breaks poles, so the amount of time it takes is directly related to how much damage is done."

"As we restore service, one of our challenges with the continued wind is we lose additional service," Fletcher said. "And that's what's happened throughout the course of the day."

We Energies said on top of its own crews, it is working with contract crews that will work throughout the next few days to restore power to customers.

"Twenty-four hours a day until all of this is restored is what we're doing," Fletcher said.

Just before 3 a.m. in Wauwatosa, strong winds caused a tall pine tree near 65th and Wisconsin to suffer a fatal crack. A neighbor went outside to snap pictures of it.

Five minutes later, the tree gave way, bringing down a brick balcony on the house right next door.

"It was really windy, it sounded like a freight train most of the time," said Tom Schall of West Bend.

Twelve hours after the storm began, tree services have been busy, leaving a lot of chopped wood for pickup.

On Eder Lane, the noisy storm had Tom Schall concerned about his home.

"I have awnings on the house and they were going crazy. I thought they were gonna rip off, actually," he said.

Schall's awnings stayed in tact, but his shingles did not. He walked us to the backyard where we discovered where the shingles landed. Then he paused, expressing thankfulness.

"I had trees here a couple years ago I had taken down. So I'm glad they're gone, otherwise they would've come down for sure," Schall said.

Across the area, downed wires and branches were common sights, as were toppled trash cans.

"Well today was recycling, I'm not taking that recycling out. I mean it will be all over the front yard," said Schall.

Arborists say the downed branches and trees resulted from older, compromised trees, and a good rule of thumb is to have your trees checked every few years for weak spots. 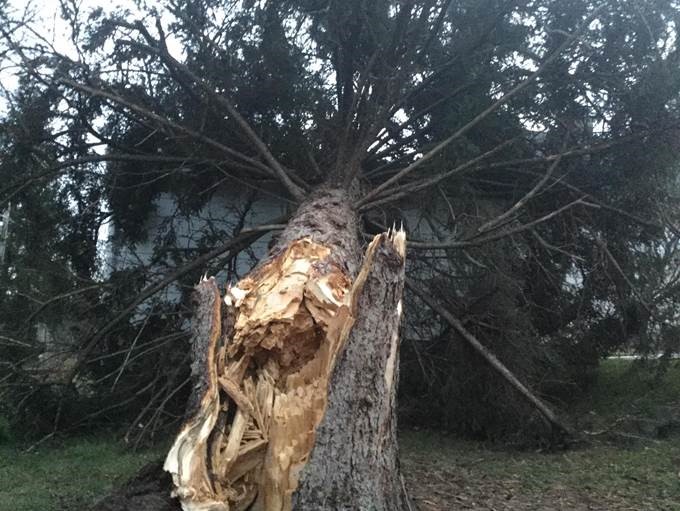 What does it look like where you live? send us your damage or wind pics/videos to pix@CBS58.com

This is a developing story. Stick with CBS 58 on air and online for the latest.