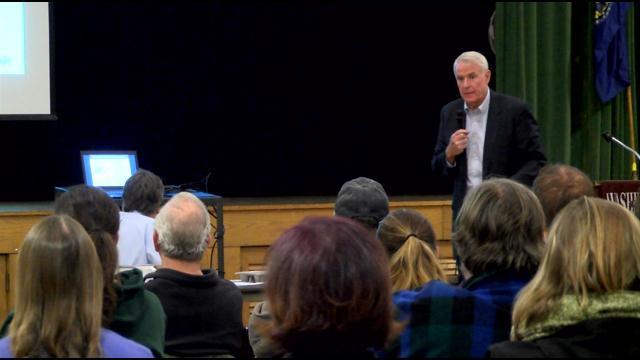 In a little more than a week the Milwaukee Common Council is scheduled to vote on the contentious streetcar proposal.  Mayor Barrett's been making several stops around town to sell the idea to the public. Tonight was the west side.

And with that vote coming up quickly Mayor Barrett is making a last ditch effort to rally support around plans for a street car in the city of Milwaukee. He says he is trying to continue the forward momentum Milwaukee has by bringing more people to the heart of the city.

\"I feel like if i had friends coming to visit I would use it. But I'm mostly excited about the expansion of metro-transit in general. I think that would really positively impact my neighborhood.\" said Milwaukee resident Laurel Cutright.

This is the kind of person Mayor Barrett is targeting: young people with a desire to be in the heart of the city. He's suggesting the streetcar could be a main source of transportation for them, potentially eliminating the need of a vehicle for downtown residents.

But this is Wisconsin in February. What happens when a major winter storm like the one that we're just digging out of blows into town?

Barrett says they're prepared and have already included the potential cost of cleanup in the budget.

\"We anticipate that we're going to be able to deal with those issues. Again if you have a once in a hundred year storm it may cause problems, but we certainly anticipate, based on the experience of not only Denver, of Minneapolis, of Portland, Seattle, Toronto, that it will run throughout the entire year,\" said Barrett.

The group collecting signatures, Citizens for Responsible Government, tells us they've collected about half of the nearly 31,000 signatures needed.

And Alderman Bob Donovan who has been very vocal in his opposition to the streetcar says he will be releasing details of an alternate proposal sometime Tuesday.