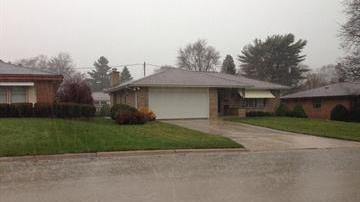 SOUTH MILWAUKEE -- The storms touched most areas in southeast Wisconsin.  Hail came down across downtown Milwaukee.  And more than 3,000 people were without power in South Milwaukee.

\"It was pretty bad,\" Jim Sivilotti said.  \"It was black as night. We had some big hail, really big hail, bigger than marbles.\"

sivilotti was walking his dogs at a local park when the storm rolled in.

\"The wind was howling, trees were bending, all the power went out, it was pretty ugly.\"

He said the rain came down hard.  He's got standing water out front thanks to his leaf pile.

Don Merenski didn't think the storm was too bad - but was surprised to see watches and warnings in November.

\"Pretty high winds, but it was bearable,\" Merenski said.

He was outside in between downpours cleaning up.

\"Trying to get the water so its got a nice clear shot of flowing right down to the sewer.\"

WE Energies got the power back on for most in South Milwaukee in about two hours.