Stores Offer Quiet Shopping for Families of Kids With Autism 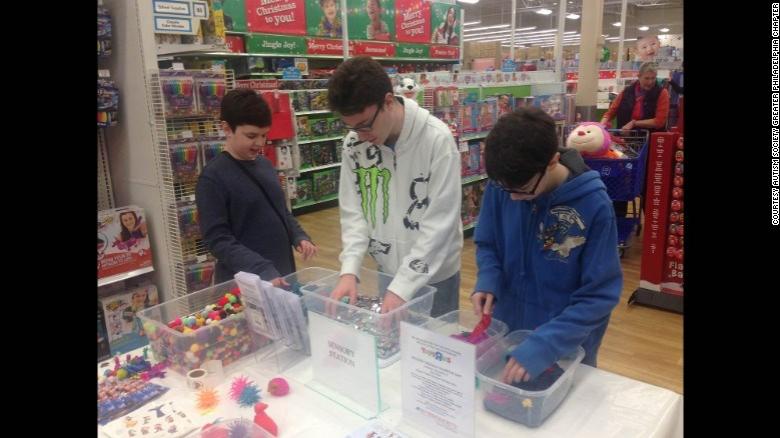 (CNN) -- Though the holiday season is a favorite for many people, crowded stores full of shoppers running for the last toy on the shelf can be stressful.

For families of those on the autism spectrum, shopping can be nearly impossible — and especially during the holidays.

Some retailers, including Toys "R" Us and Target, are reaching out to that community, hosting special shopping days and events intended to cut down on the stress.

People on the autism spectrum can be sensitive to sensory triggers like bright lights, loud noises and crowds.

After Toys "R" Us stores in the United Kingdom offered a "sensory-friendly shopping day," Patti Erickson, president of the Greater Philadelphia Autism Society, saw the success and got her local store on board.

The store in King of Prussia, Pennsylvania, hosted the first holiday season shopping event Saturday in collaboration with Erickson's Autism Society chapter. More than 30 families came out for a quiet, two-hour shopping experience.

The store was open to the public as usual at 8 a.m. but wasn't crowded, and the overhead music was turned off, company spokeswoman Candace Disler said.

Music can be an agitating trigger to people with autism. "They're processing it differently, and it could maybe even sound like nails scratching on a chalkboard to them," Erickson said.

Sensory stations with activities like kinetic sand and weighted blankets helped the children get grounded, according to Erickson. "Different sensory things help them get acclimated to the store and grounds their body so they can really stay focused and can almost ignore anything else around them that would bother them," she said.

A boy and his bed

Adam functions at a preschool or kindergarten level, according to his mom, Linda, and communicates through an iPad app that speaks for him based on images he recognizes.

His struggles with verbal communication, making it difficult for Adam to tell his family what he likes and how he's feeling. But when he was able to roam the quiet store, he silently locked his gaze on a bed shaped like a big red Jeep.

"It was the look on his face and the fact that he went and sat down on it and then laid down on it" made it a winner, Linda Moser said.

Moser went back by herself Monday to buy the bed. "With the phones ringing and waiting in the crowded customer service line, we would not have been able to stand there for the 15 minutes to order the bed," she said.

She has to guess about most things she buys for Adam, as she's unable to take him to try them out. She often uses resources like the Toys "R" Us "Toy Guide for Differently Abled Kids."

On Saturday, store workers also transformed one section into a toy demo and play area where families could try some items from the guide.

The chain has worked with the National Lekotek Center for more than 20 years to produce the toy guide, Disler said. The nonprofit, which specializes in helping children and increasing community inclusion through play, evaluates and recommends toys in the guide that are developmentally appropriate for children with disabilities.

'A smile versus a stare'

For parents like Moser, who has three boys, two of whom are on the autism spectrum, family outings can be just as stressful for adults as they are for children.

"Having them out in the community, bolting and going in a back room they're not supposed to be in, or they're having a tantrum because they want a fifth copy of 'Goodnight Moon,' " Moser said, describing some of the difficulties. "They're not children that need discipline. It's literally, we're trying, and giving into them every time doesn't do them any good. You know, there's a reason for it.

"When you have those parents who mutter under their breath and stare, you know, it hurts. A smile versus a stare makes such a difference."

That possibility of a tantrum and the judgment and stress can be discouraging to families. Experiences in public, however, can be vital to the development of children with autism.

"If we're avoiding those situations, we're not able to teach them how to navigate them," said Candice Colón-Kwedor, senior clinical director at the May Institute School for Autism and Developmental Disabilities.

This is why Erickson, who has 26-year-old daughter with autism, aimed to facilitate the shopping event, held during store hours but in a controlled setting. "These are opportunities to grow, and we understand they can't shut down the entire world for our folks.

"We want them to go in just like any other customer, and they were able to handle it and enjoy it, and I think that's what we saw," Erickson said.

Just in case, the employee break room was transformed into a quiet room for families whose children became agitated and needed to rest.

The Toys "R" Us "sensory-friendly shopping" initiative, which started in the UK three years ago, is being rolled out in the United States, Disler said.

After encouragement from advocates like Erickson, the chain launched a US pilot program, hosting about eight shopping events at stores across the country since June.

The holiday event was geared toward adults and children who came with the Autism Society, but for traditional shoppers, literature about the disorder was also available. "It served as a teachable moment," Erickson said.

Advocacy groups across the country are approaching retailers to collaborate in the effort to bring an inclusive shopping experience.

Store leaders at Target in Lancaster, Pennsylvania, partnering with Wellspan Health Philhaven, planned a similar shopping event to help that community. However, the chain does not have plans to expand the events company-wide, spokeswoman Angie Thompson said.

Bass Pro Shop in Foxborough, Massachusetts, has partnered with the Boston-based May Institute for a "Sensitive Santa" event for the past two years. Families are able to meet Santa in the store before it opens to the public.

And because surprises can be unnerving, the May Institute also aims to cut down on those, providing parents with a storyboard illustrating each step of the event, spokeswoman Julie Burgess said.

About 1% of the world's population has been diagnosed with autism spectrum disorder, according to the US Centers for Disease Control and Prevention.

Moser hopes more businesses will continue to develop initiatives for the growing community of families who cope with these challenges. "There's a lot of us, and getting us out in the community is really great for the kids, but we can't always do that," she said.

"It changes the family dynamic 24/7, turns everything upside down," Erickson said.

"When you have something like this, it makes it easier on everyone, and that can mean so much to a family."

Erickson is planning to co-host another Toys "R" Us shopping event in the spring, "because it really is helpful all year-round."