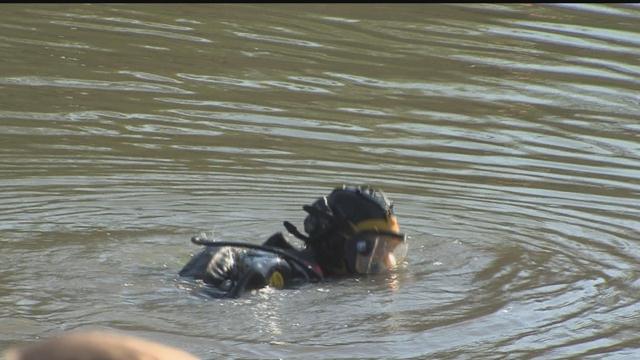 First responders say when they arrived they saw the roof of an SUV peaking through surface of the water.

Rescue and dive teams were called out.

They began searching the area for any bodies or evidence and didn't find anything throughout the entire pond other than the vehicle.

They were able to then pull the it out of the water. And you could see the water gush on out.

The Kenosha Police Department was able to determine the vehicle, a GMC Jimmy, was reported stolen last night.

Officials say they don't think the car was in the water long because the headlights were still on.

They say some of the gasoline from the vehicle did leak into the water, and clean up has already begun.

"There is a certain aporatis that is placed that essentially soaks it up like a sponge without becoming water logged. it only takes the patroleum parts of the pollution. if it spreads out across the entire surface, it's more difficult to get. but  with the wind any everything and with the water coming up with rain coming in the next couple of days, they'll get it on it's way out so it doesn't pollute the system and doesn't have to be taken care of at our water utility,” said Battalion Chief Matthew Haerter |Kenosha Fire Department.

Police are currently reviewing surveillance video from the area to see if they can find s suspect.