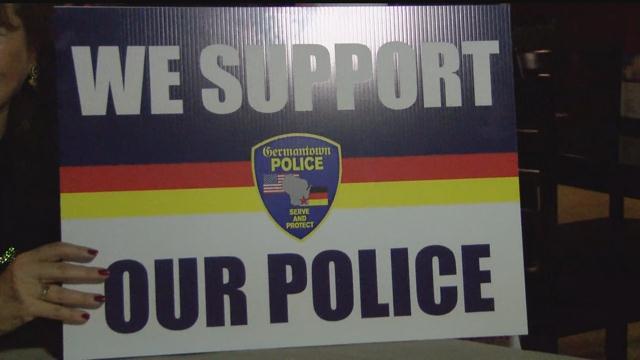 They're signs meant to show support for police but they're disappearing left and right in Germantown, even from the police chief's own yard.

"Shame on them. I'm not gonna lose sleep over it. They're going to think about it in 10 years and say,"Huh that was stupid," said Barb Watters,

Watters and her husband Larry Owen try to do something nice for the police force every fall. This year, it was signs of support.

"Yard signs seemed to be the right thing to do. They don't expire, so you can put them out fall, spring, five years from now," said Watters,

"We started with a batch of 50, we didn't know how it was going to go. Now we're in the hundreds," said Larry Owen, her husband.

The first night they were handed out, one was stolen right from the Chief of Police Peter Hoell's yard.

But he's not the only one. Comments on the Germantown police Facebook page show dozens of signs have been stolen.

"Maybe someone is disgruntled with us, maybe we have them a ticket for something and they want to blame us," said Officer Bob Case.

While signs have been reported missing from all across Germantown, a large number were reportedly stolen this weekend on Main Street, leading police to believe it might just be someone who's had a little too much to drink.

"We're relating it to bar patrons walking away from the bar with some signs," said Officer Case,

Regardless of who it is, police say this is a serious crime.

"You're actually doing a theft and trespassing and they're both $439 tickets," he said.

They say put the signs closer to your home or inside. But no matter the location, it won't stop the community from supporting their police.

"As far as I'm concerned, it's only going to strengthen our resolve in what's going on," said Owen.

Germantown police say the only way they can catch the person or persons responsible is with a good description or license plate number. If you have any information, give them a call at (262) 253-7780.