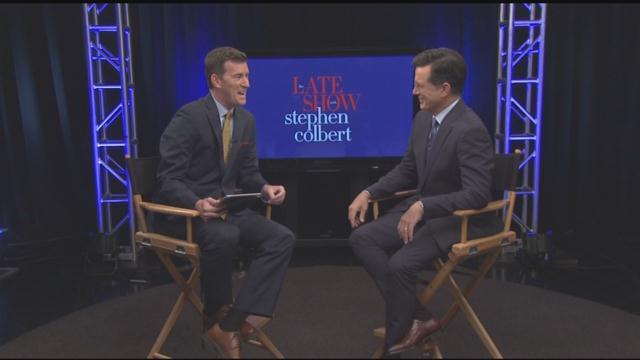 Stephen Colbert took over late night Tuesday, September 8th. Ahead of the big premiere, he sat down with me, Bill Walsh.

Since he's already had volumes of articles written about him, I'm not going to try to compete, but instead list off some impressions and anecdotes about meeting him bullet-point style.

-Colbert came to Chicago for a day, and just about every CBS affiliate in the Midwest sent a news crew there to get a 10-minute interview and shoot promos with him. Columbus was first on the list, Milwaukee (CBS 58) was second. Michele and I drove to Chicago on a Monday night, and had to be at the WBBM studios Tuesday morning at 7:15 am. WBBM has their own makeup person on staff. I normally do my own makeup, and have never felt more \"big time\" than having it done for me.

-I was told weeks ahead of time that I was getting this interview. And during those weeks I consumed all things Colbert. All of the Late Show podcasts, all of the videos on his website, his appearance on \"Comedians in Cars Getting Coffee.\"  I also watched the \"Better Know a District\" series at length-- and the one with Milwaukee Rep. Gwen Moore is incredible.

-My goals for the interview:
1  Have fun with Colbert, but also ask him serious questions. I didn't want the ten minutes to be only a goof.
2. Learn Colbert's impressions of Milwaukee/Wisconsin.
3. Given how I had watched him demolish politicians, avoid a viral YouTube gaffe.

-Before the interview officially started, Colbert and I sat in front of the WBBM camera crew so they could shoot what's called \"b-roll.\" B-roll is video that a story editor will use to cover what the reporter says in the piece. So while b-roll was being shot, I tried to make small talk.  I watched the interview with the anchor from Columbus, and she brought him gifts (a station coffee mug and a stuffed Ohio State Buckeye mascot). So when I told Colbert that I forgot to bring him brats and cheese as gifts that would best represent Milwaukee, he immediately lashed out in pretend-indignation. \"Oh, how stereotypical,\" Colbert said. \"Brats and cheese? You know, if Milwaukee was a race, you would be a racist. You are a racist, sir!\" The writers that came with Colbert on the trip burst into gut-busting laughter. That's why I was nervous, in an interview setting he is unpredictable-- and also in complete control of what happens.

-Colbert's main connection with Milwaukee is Marquette alum Chris Farley, and Colbert was effusive in his praise for him. \"Wonderful guy! Somebody was asking me earlier if you have to be smart to be funny. It really does help,\" he said. \"People don't think of Farley as a smart guy, but he was brilliant. He was a really smart guy, it takes intelligence to play somebody that dumb, as he would always play dumb characters or insecure characters. But Farley's great, really sweet, unbelievably talented. When he was on stage, all you wanted to look at was Chris. Really fun to tour with.\"

-Colbert did gigs in MKE with Second City a couple of times. \"I know it sounds stereotypical but we would have beer and brats,\" he said. How stereotypical, indeed. He also spoke of traveling to Madison with Farley.

-Colbert said on one of his podcasts that when he lived in Chicago, he claimed $8500 for a year's income on a tax return. It was at least 20 years ago, but even in the 90's I can't imagine how hard it would be to live in Chicago on that kind of money. He didn't seem to think it was that big of a deal. \"I'm one of 11 children. So when I was a kid, it was powdered milk and hand-me-downs.\" he said.

-Comedy was not Colbert's first love. \"I wanted to be a real actor, I had a beard, I wore a lot of black, I wanted to be Hamlet. I suffered at people publicly, you know, I was a real stereotypical actor. I waited tables. I did a lot of black-box avant-garde theater,\" he said. He worked in the box office in Second City, and employees got to take free improv classes, and that was the genesis of his career in comedy

-My one attempt to joke with Colbert did NOT go over well. He said that he likes to listen to podcasts when he goes to sleep at night. \"Oh, we have something in common,\" I said, \"I like to fall asleep to YOUR podcast.\" There were about 20 people in the room-- some of Colbert's writers, some executives with CBS, the camera crew, etc. Dead silence from ALL of them. Went over like a cell phone ringing in church, I felt sick to my stomach. FWIW, I never meant it as an insult, more just a play on words. For the past couple of weeks, I put on his podcast when I lay my head down to bed, and sometimes I'd fall asleep before the podcast was over. I actually found his podcasts very interesting-- especially when he broke down the process of comedy writing.

-Colbert doesn't think political conservatives are still mad at him for all the jokes at their expense on The Colbert Report. \"I'm not mad at them,\" he said. But it take me long to find internet comments from people that seem to be holding a grudge.

-Colbert does a Trump impression. I like the script Colbert uses as Trump, but I'm not sure Colbert (or anyone else) has the voice down pat.

-When I asked Colbert how he'll judge success on the Late Show, he said if the audience is laughing he's doing a good job. I believe him. He remodeled the Ed Sullivan theater to be able to better connect with the audience. Even during our interview when he told a joke, often he would immediately look to his group-- he seemed to crave the support from his writers. If you listen during the two-part video portion of the story, sometimes you can hear the writers laughing in the background.

-He also seems excited to ditch the character from The Colbert Report. During our interview, he described the character as \"willfully ignorant.\" He says he was always jealous of the way Jon Stewart could approach an interview by being genuinely interested in people.

-Looking back, I had a few regrets with the interview. I forgot to ask him about the Milwaukee Lion-- I know he would have had a great bit about it. I also didn't have time to ask him about being a devout Catholic, but also setting his comedy cross-hairs on organized religion. I also wished I would have let my guard down a little more.

-An amazing experience. He's so quick, so intelligent, the smartest man in the room wherever he travels. I'm considering taking local improv classes. Not because I'll ever be a comedian, but it could never hurt to practice being able to think fast and act fast in any setting-- just like Colbert.

-My co-anchor Michele watched the interview, and shot promos with us after. Her impressions of the day are here.