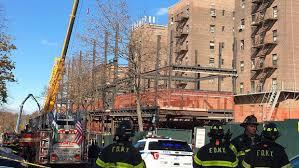 (CBS) NEW YORK -- A steel beam that fell at a construction site in Queens killed two workers, the FDNY said on Tuesday.

Authorities and witnesses said the beam, which was being hoisted at a construction site, fell after a cable snapped, killing a crane operator and a co-worker.

The incident took place just after noon in Briarwood, CBS New York reported. It wasn’t immediately clear what caused the accident, and whether or not wind played a role. Weather reports suggest that wind at the time of the accident were at about 20-25 mph with gusts up to 40 mph.

Under new rules that New York City Mayor Bill de Blasio’s administrationannounced in February, all crawler cranes are to cease operations and go into a “safety mode” whenever sustained winds are forecast to exceed 20 mph and gusts more than 30 mph.

“Saddened to hear about the deaths of two construction workers in Queens after a crane collapse,” he tweeted. “My heart goes out to their families.”

Saddened to hear about the deaths of two construction workers in Queens after a crane collapse. My heart goes out to their families.