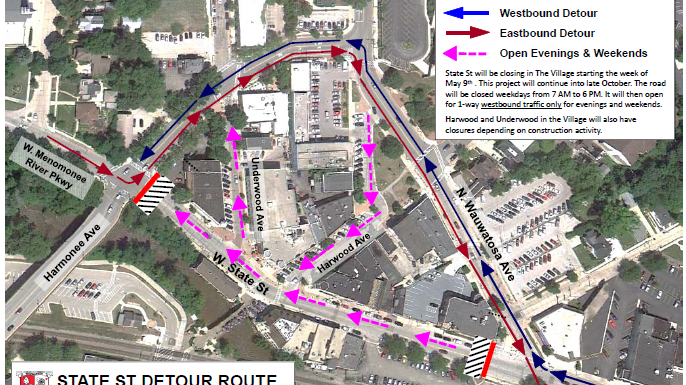 A long awaited project is set to begin Monday morning in the Village of Wauwatosa.

Those closures will mostly impact drivers during the day, when drivers will have to use detours to reach the heart of 'Tosa.

"By 6:00 at night, everything's going to be cleaned up, and there will always be one way traffic at the minimum, going West on State Street," says Mayor Kathy Ehley.

Both lanes will also be open on the weekends, allowing access to the Village during peak business hours.

The $20M+ project is scheduled to take roughly 3 years, replacing aging water and sewer pipes under the road. Village officials are using it as an opportunity to enhance the village above ground, adding "European" features like paver stones and cafe lighting.

"We're going to give it a historic feel on the surface, but underneath, it's going to be the latest technology," says Ehley.

Drivers will be detoured onto Wauwatosa Ave and Harmonee Avenue, bypassing downtown by going North.

Businesses are hoping customers are patient with the detours, and still willing to walk into the village.

"A lot of people have adopted a walking attitude, it is sort of a European attitude, to park a few blocks away, and walk the village," says Deb Fowler, owner of The Flower Lady.

Phase two of the project is set to begin next year. You can learn more about the project, and view a full list of detours here.