State of the Tribes speech touches on gaming and offensive mascots, does not mention failed Kenosha casino 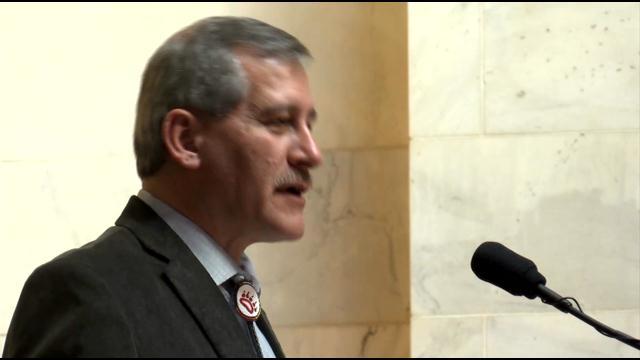 Wisconsin's First Nations were recognized in Madison Thursday in the tradition that's called the \"State of the Tribes\" address.

It's an annual opportunity for all 11 Tribal Nations to express their concerns.

\"The infringement of the state on gaming compacts by allowing convenience stores, taverns and laundromats to offer unlicensed and unregulated un-taxed gambling,\" said  Chris McGeshick of the Sokaogon Chippewa Community.

He did not mention the failed attempt to set up a Menominee operated casino in Kenosha.

A representative from the Potawatomi who run a casino in Milwaukee was not present for the speech.

George Ermert, a Potawatomi spokesman, says it was a scheduling error and not connected to the casino issue.

\"If you recall,\" Ermert told CBS 58 News, \"The Menominee gave the speech last year and the Potawatomi were there. We only got word of the event last week. It was a scheduling error.\"

Chairman McGeshick received the biggest applause when he spoke about fracking and stopping mining in the north woods of Ashland and Iron counties.

\"When it comes to the Penokee Hills mine, we are not going to see that mine happen while I am here.\"

He also addressed the head of schools, Tony Evers, directly is demanding a curriculum that tells the story of the tribes and lamented what he saw as a softening of the attempts to stop offensive tribal symbols for school sports team mascots.

\"The progress for Wisconsin to be innovative in the 21st century is that all students must be educated to become career ready.  As Wisconsin's student population becomes increasingly diverse, the persistence of racial disparities in the education system poses real challenges to opportunities.\"

McGeshick implored the audience to support the efforts to expand ACT 31 and create a committee that will develop teachings on native history.

\"The resources must be made available across Wisconsin.\"

McGeshick said tribal leaders have not forgotten the mental detriment caused by racial based mascots.

\"We believe the recent decision to override the progress made with the state in regards to the school mascots to be a mockery of the indigenous people in our state and around America.\"