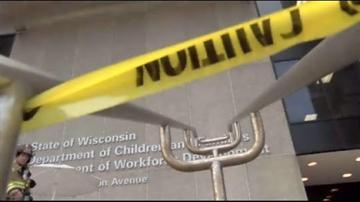 MADISON -- We've all heard the saying an ounce of prevention is worth a pound of cure, and that's now at the heart of a bitter back and forth between Governor Scott Walker's administration and the fire marshal in Madison with your tax dollars at stake.

Madison's fire marshal, Ed Ruckriegel, says if the GEF 1 building had sprinklers, then last month's overnight fire would've done just thousands of dollars in damage instead of hundreds of thousands of dollars. Now he is recommending the Department of Administration install sprinklers in this and other state buildings.

This building is still closed, keeping about 1000 state employees out of their offices.

Madison's fire marshal says since the building is older, it didn't have sprinklers, and that let the fire to spreading and causing more damage.

The Department of Administration isn’t exactly on board with Ruckriegel’s assessment.

In an email from the Department of Administration's spokeswoman, Stephanie Marquis, she says, \"No organization wants to experience the damage caused by a fire, and we are glad that everyone is safe. The fire was ruled accidental by the Madison fire department and the building was up to fire code.  The conclusion there would have been no or minimal damage with sprinklers appears unrealistic.  In addition to fire damage and the smoke damage circulated throughout the building, the water from the sprinklers could have also ruined computers, equipment, work files, and office furniture. The State will continue to evaluate the conditions of buildings occupied by state employees and follow all fire codes.  Our staff have done an amazing job of maintaining customer services for our taxpayers, and they'll continue to do so as we move forward.\"

The DOA has given not answered whether they plan to install sprinklers in this or other state buildings that don't have them.

It's also important to remember the GEF 1 building was up to fire code even though there were no sprinklers, and that's because of how old the building is.