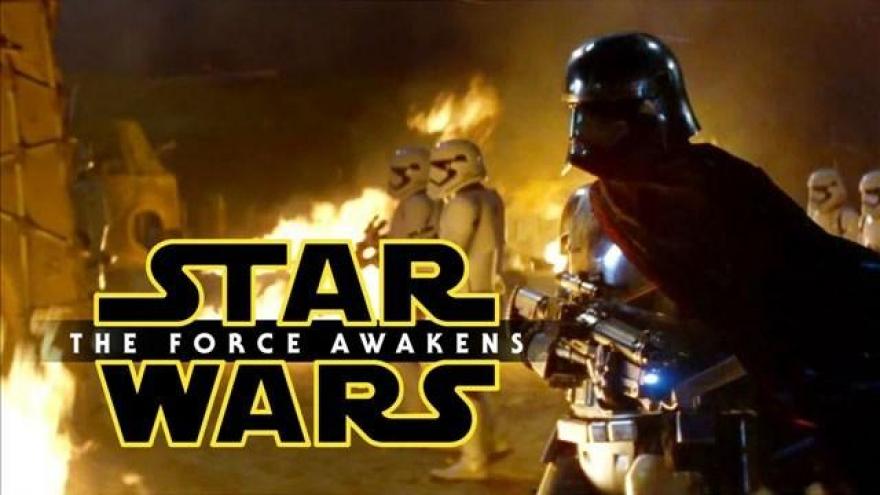 (CNN) -- Do you have a high count of Force-sensitive midi-chlorians? You can stop reading this article now.

But for those of us who need a little "Star Wars" background -- or just a refresher on the Galaxy That George Created -- here are a few things you should know about one of the most successful franchises in the annals of pop culture:

In 1973, director George Lucas was a promising filmmaker a few years out of film school. His second feature, "American Graffiti," had just been completed, and he set down ideas for a new project, which he called "The Star Wars."

"Graffiti" was a surprise smash, and Lucas was given the go-ahead for the new film.

He concocted a broad tale about "a galaxy far, far away," featuring an oppressive empire, interstellar bounty hunters, comic androids, a kidnapped princess and a headstrong, orphaned young man eventually named Luke Skywalker -- his name, by no accident, resembling Lucas' own.

The move from script to film was not easy. Two studios turned it down, and Lucas struggled to keep the budget below $10 million. Not even his cast was always enthusiastic: During filming, actor Harrison Ford told Lucas, "George, you can type this (crap), but you sure as hell can't say it."

There are enough characters in the "Star Wars" series to keep whole websites thriving, but here are some of the most important:

Luke Skywalker (Mark Hamill): Hero of the first three films, savior of the universe, a lonely farm boy who turns out to be descended from galactic nobility.

Darth Vader (David Prowse, voice by James Earl Jones): Tall, be-helmeted villain who succumbs to the Dark Side and seeks to dominate the Galactic Empire at the side of the Emperor. Faces off against Luke, who turns out to be his son, and eventually finds a small bit of goodness left inside himself. Before he becomes Vader, Darth is Anakin Skywalker (Jake Lloyd, Hayden Christensen), the Chosen One who's supposed to bring balance to the Force. That doesn't work out so well.

Princess Leia Organa (Carrie Fisher): A tough-minded princess from Alderaan, political leader and Rebel sympathizer, she's captured by the evil Vader, watches her planet get destroyed and gets romantically involved with Han Solo. She also turns out to be Luke's twin sister and Vader's daughter.

Han Solo (Harrison Ford): Swashbuckling pilot of the starship Millennium Falcon who, after maintaining a Bogart-esque "I stick my neck out for nobody" attitude, becomes invested in the Rebel cause, saves Luke's life and becomes a military leader. Gets the girl (Princess Leia) after much repartee. Chewbacca (Peter Mayhew), a furry Wookiee, is his co-pilot and right hand.

Obi-Wan Kenobi (Alec Guinness, Ewan McGregor): Wise man who takes Luke under his wing and dies at the hands of Darth. In the earlier chronology, a Clone War veteran who mentors Anakin Skywalker before Anakin turns to the Dark Side.

C-3PO (Anthony Daniels), R2-D2 (Kenny Baker, burps and beeps by Ben Burtt): C-3PO is an etiquette droid, prim and proper. R2-D2, a squat and bulbous fix-it droid, is his sidekick. The pair have been in every film.

Yoda (voice by Frank Oz): A famed Jedi Master and beloved teacher, he instructs the raw Luke Skywalker in the ways of the Force. He has a habit of syntax his reversing.

Jar Jar Binks (voice by Ahmed Best): Loathed by fans, a floppy-eared Gungan with a Caribbean accent who functions as comic relief. As a politician in the Galactic Senate, helps set the galaxy on the road to ruin.

Boba Fett (voice by Jason Wingreen and others): Warrior and bounty hunter born as a clone. Captures Han Solo to earn a reward. Ends up in belly of a beast. Though not a major movie character, he's a fan favorite.

Emperor Palpatine (Ian McDiarmid): A conniving senator from Naboo who keeps his identity as Darth Sidious -- a Dark Side follower -- quiet while he builds his power base. Eventually, that base includes Anakin Skywalker/Darth Vader, and Palpatine takes over the Empire.

In order of the saga:

I: The Phantom Menace: The Galactic Republic's a mess. A trade dispute threatens harmony. Jedi Qui-Gon Jinn and Obi-Wan Kenobi meet young Queen Padme Amidala. When transporting her to Tatooine, they meet Anakin Skywalker, pod-racer extraordinaire. He seems to be something special.

II: Attack of the Clones: Anakin becomes Padme's bodyguard. Anakin and Padme fall in love. Clones and droids fight over the future of the Republic. Yoda battles Count Dooku.

III: Revenge of the Sith: Anakin joins with future emperor Palpatine and is given the name Darth Vader. Jedi are massacred. Padme gives birth to Luke and Leia and dies. The children are adopted by new parents. Vader and Palpatine take control of the Empire.

V: The Empire Strikes Back: Luke trains as a Jedi. Leia says she loves Han. "I know," replies Han, before being encased in carbonite. Luke travels to battle Vader, who reveals he's his father.

VI: Return of the Jedi: The Empire builds a new Death Star. Han is freed and becomes a general. Luke tries to save his father. The Empire is defeated. Everybody lives happily ever after.

"Star Wars" premiered on May 25, 1977, with a force both immediate and startling. Few films had approached the level of its special effects, and virtually no other '70s film had approached its deliberately pulpy attitude. There were the fabled lines around the block to get in.

The film has been credited -- and blamed -- with establishing the current economic model of the film industry: aimed at young males, heavy on special effects and comic-book imagery, and dependent on blockbuster returns.

• Box office: Including re-releases, the six films have taken in $2.2 billion domestically and $4.5 billion globally. The box office leader is "The Phantom Menace," which has made close to $1 billion worldwide by itself.

• Merchandising: Lucas shrewdly held on to the merchandising rights. "Star Wars" products have grossed more than $20 billion. The money allowed the filmmaker to expand Industrial Light and Magic, his special-effects shop, and create a whole mini-industry near his home in Northern California, away from Hollywood. In 2012 Disney, no stranger to merchandising genius, bought Lucasfilm for $4 billion.

• Culture: "Star Wars" has become deeply rooted in the culture. Just for starters, terms and phrases from the "Star Wars" universe include "May the Force be with you," "Jedi," "Death Star" and the beginning of the opening narrative crawl, "A long time ago in a galaxy far, far away ..." When Ronald Reagan proposed a space-based system of anti-missile technology in the early '80s, the news media quickly gave it a nickname: "Star Wars."

• And more: To some, "Star Wars" really is a religion. In the 2001 England and Wales census, almost 400,000 people identified their religion as "Jedi," after the class of noble warriors created by Lucas. It's still followed there by more than 175,000.

The newest film in the saga, "The Force Awakens," was announced in October 2012 when Disney bought Lucasfilm. Initially, Michael Arndt ("Little Miss Sunshine," "Toy Story 3") was to write the screenplay, but the final version is credited to J.J. Abrams and Lawrence Kasdan (who also wrote Episodes V and VI). Abrams directed.

The plot is set about 30 years after the events of "Return of the Jedi." A number of the original trilogy's characters have returned, including Luke, Han and Leia.

"The Force Awakens" will open on more than 4,100 theaters in the U.S., including 392 IMAX screens, says the Hollywood Reporter.

Estimates for its opening-week box office are all over the place, but there's a possibility it could beat the current record, set this year by "Jurassic World." That film made $208.8 million in its first weekend. "The Force Awakens" has already set records for advance sales.

In other words, it will be a Force.