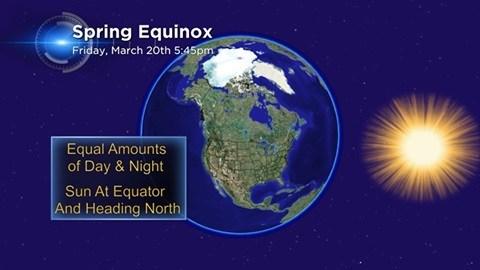 Calendar Spring officially starts Friday at 5:45 pm for southeast Wisconsin. That's when we experience equal amounts of day and night as the sun's direct rays point toward the equator. And from here towards summer the Earth's axis tilts the northern hemisphere toward the sun giving us longer days and shorter nights.

What kind of weather can we expect as we head into the season? Well, in the short run, it does look like we'll see some cooler days to end the month of March. Today the National Weather Service's Climate Prediction Center put out their April temperature and precipitation outlooks as well as the three month forecast period including April through June.

As you can see from this image, nothing major is expected in terms of temperature departures from the average here for Wisconsin. April averages highs from the upper 40s to upper 50s with lows moving from the lower 20s to the freezing mark by the month's end.

Thoughts are focused on a potentially drier month than normal for Wisconsin:

We're looking at a 40% probability of drier than normal conditions. April averages 3.56\" of precipitation, with that, 2\" of snowfall is normal.

But what about the spring season as a whole? Here's what you need to see:

Again, nothing that sticks out in a big way in terms of temperatures for April through June. But, if anything we could be on the closer end to warmer than normal versus colder than normal. That should give summer lovers some hope, right?! The precipitation outlook for the season mirrors that for April which puts us in a higher probability for dry conditions.