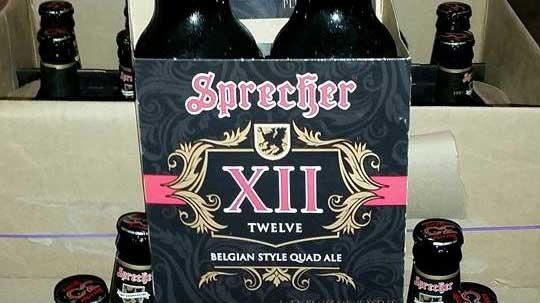 For Sprecher’s 30 Anniversary the company created a  XII, a Belgian-style Quadruple (Quad) ale. Brewed in March, the beer aged six months until it was bottled on September 23.

Predominant flavors include caramelized sugar, toffee, dried fruits (fig, cherry, raisin, plum), molasses, light spice (clove, pepper, nutmeg) and a slight hint of citrus. Semi-dry to sweet, this is a strong beer--10.5% abv, alcohol by volume--that is still coming into its own and will continue to develop for many more years.

It was named XII in honor of its historical designation, when 19 century Trappist monks identified beers by numbers roughly corresponding to the original gravity, which is a measure of the unfermented wort.

“In making this Quad our brewmaster, Craig Burge, took on a huge challenge. He created a very sophisticated beer that can be enjoyed for many years to come. I plan to do vertical tastings, cellaring some of the bottles for at least a decade,” said Randy Sprecher, founder and CEO of Sprecher Brewery.

A very limited edition beer, XII is packaged and kegs and 12 ounce bottles. Only 460 cases of bottles were packaged. They are available for purchase at the Sprecher Gift Shop, 701 W. Glendale Ave, Glendale, WI. Currently XII is on tap at World of Beer in Wauwatosa, and will be offered September 25th at the Humboldt Park Beer Garden as part of the Sprecher Tap Takeover.