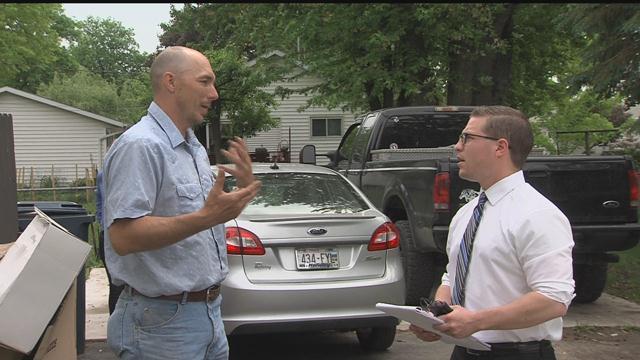 A court filing shows a Waukesha County Sheriff’s Department is investigating a Fond du Lac area contractor. The detective writes a family paid that contractor more than $20,000 and that contractor ripped off the family’s roof in the middle of last winter, then never came back to finish the job.

CBS 58 found other people who tell a similar story about the contractor who goes by Pastor Dave.

Kate Juedes said, "We don't want anybody else getting ripped off. He stole money from us, stole it."

Kate lives outside of Fond du Lac with her husband, Richard. The couple say they were ripped off by David Ward, a man who they thought was a friend.

On his website, Ward advertises himself as a contractor, an operator of a ranch for abused horses, and a pastor.

Kate Juedes said, “That's why I believe he's a con artist, because he comes off as this extremely amazing guy, he does all this charity work with all these horses and animals.”

The couple hired Ward’s company, Man of Steel Roofing. The Juedes family paid Ward to put a roof on, but they say he only did some of the work, and left the rest up to the family.

Richard Juedes explained, "I had my brother, my dad, and me pretty much put that roof on."

Patricia Bannen in Manitowoc County says she paid Ward thousands to replace her windows, but it never happened. She says ward is a smooth talker.

She said, “Very good, most people meeting him would believe him 100 percent if they didn’t know better.”

We took these accusations to Ward himself. He agreed to meet with me in Fond du Lac Wednesday morning. I asked him if he uses the title of Pastor Dave to build trust so he can con people out of money.

Ward said, "It’s not part of a con or scam, it's just simply letting them know who I am."

Ward is currently working on a home in Fond du Lac; he took us inside to show what he's done. The homeowner told CBS 58 she’s satisfied with Ward’s work, and does not believe the accusations against the contractor.

Both the Juedes family and Patricia Bannen took Ward to court, and each were awarded more than $10,000.

Ward says he admitted in court he owes Bannen, but he says he didn't show up to court in the Juedes case because it was a handshake deal between friends, and he didn't keep records to back up his story.

Ward said, "I guess the second reason I didn't is because I figured you know, I’m just tired of this headache anyway, I don't plan on having my own business going much longer. I'm finishing up the jobs that I have currently going on the books, but then I’m not going to be doing that anymore. I'm just done doing my own business."

But about four months after the judge ruled on the Juedes case, Ward wasn't done operating his “Man of Steel Roofing” business.

According to a subpoena filed by a detective with Waukesha County Sheriff’s Department, a family in the Town of Genesee hired Ward.

Once again – the detective claims Ward stopped work halfway through the project.

Ward said, "We did not get the roof on no, and we're working on that now. There are some disputes on it as well."

Ward was asked what happened to the more than $23,000 he was paid for the job. Ward said, "Materials were purchased, crews were paid." Ward said he could not elaborate without talking to his lawyer first, "Again I’m not going to go into details at this time about that job.”

Ward said he wants people to know he's never had any ill intentions, and his business was a failed venture.

He said, "Again things just got really tough on us over the winter and we're just now getting our legs under us again. I'm trying to move forward and take care of all this stuff.”