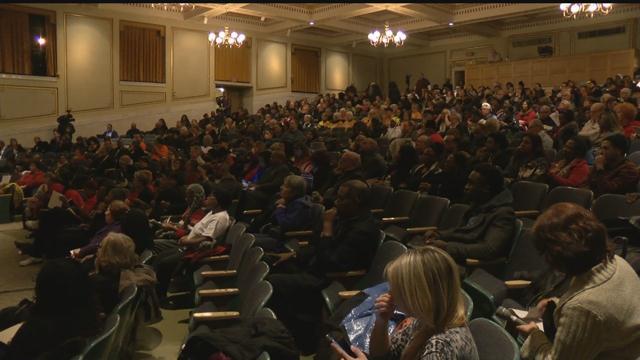 Investigating the Milwaukee Police Department, the Department of Justice is in town, at the request of Chief Ed Flynn..
And Thursday night they were asking for input from the community about MPD.

This hearing was scheduled to end at 8PM Thursday but so many people were in line to have their two minutes at the podium it spilled over well into 9 PM with plenty of heat coming from both sides.

"Police are a danger to poor communities. Police are basically just an occupying force, " said one woman.

"Four white adult individuals took it upon themselves to be the jury, judge and executioner and they choked the life out of my son," said another man.

"Our city has been overcome by violent black youth," said another woman.

Regardless of where they place the blame for Milwaukee's problem with crime, people spoke freely to the DOJ about what they think needs to change in the city of Milwaukee.

"You're saying its so difficult to understand and you have to hold public forum to look at, listen and do. But its basic," said one man.

The DOJ says this is what they wanted-public response as this is just step one of the three step collaborative reform process being implemented in Milwaukee.

"This is a long process. And this is really just scratching the surface now. But we do hope to make some connections with community members, " said George Fachner, collaborative reform specialist with the DOJ.

A process that also includes interviewing mpd personnel and reviewing data and records and then implementing policy changes. The DOJ says they hear the community's concerns but for some that's just not enough.

"What I need to know from the Justice Department is who is watching y'all? Who is watching the work you're doing?" said Maria Hamilton, mother of Dontre Hamilton.

There are more listening sessions coming up, but another way to have your voice heard is to send the DOJ an email at Milwaukee.crita@usdoj.gov