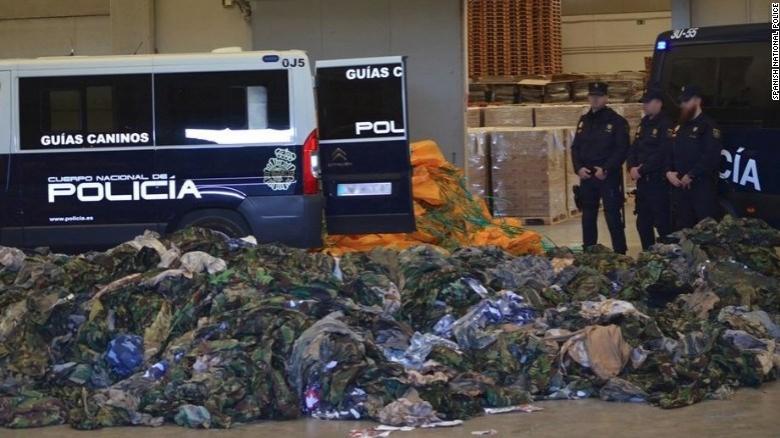 (CNN)Authorities in Spain have seized 20,000 uniforms and supplies "able to equip an army" of jihadi fighters, Spain's Interior Ministry announced on Thursday.

The uniforms were confiscated in a police operation that led to the neutralization of a "very active and effective business network," whose primary purpose was to provide a steady flow of military supplies to the terrorist organizations ISIS and al Qaeda affiliate Jabhat al-Nusra, said the ministry.

The uniforms were hidden in shipping containers and declared as "secondhand clothes" to avoid suspicion and pass through customs inspections.

Spanish police released a photo showing the camouflage uniforms wrapped in large bundles. Officials said the uniforms were stored among other clothing.

Two of the three containers were intercepted at a port in Valencia and one at Algeciras in an anti-terror operation conducted on February 7. The containers were being shipped to areas controlled by ISIS and Jabhat al-Nusra in Iraq and Syria, said the ministry.

Seven individuals, suspected of providing financial and logistical support to the terrorist groups, were also arrested in the operation.