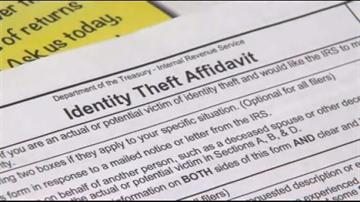 SOUTH MILWAUKEE-- One woman in South Milwaukee got a surprise when she received a letter from the IRS asking for additional information to complete her federal return.  The problem-- she never filed one.

She asked CBS 58 not to identify her, but she carries the same burden millions of  victims each tax season.

\"People still need to take heed and do something about them when they get these,\" she cautioned.

When she got the letter-- she thought she fell victim to an IRS tax scam, and believed the letter was phony.

\"I didn't do a federal form this year,\" she explained.

Last week she showed the letter to police, who said it was a scam, but she feared the letter could reveal something more..

\"The more I looked at it and thought about it-- the more I questioned it,\" she recalled.

Tuesday she took the letter to the IRS, and her fears were realized.

\"Somebody else in Ohio filed a federal tax return with my social security number,\" she said.

The letter was real, and the woman realized she is a victim of identity theft.  An IRS spokesperson says the agency sees a surge in identity theft cases during tax time each year.

\"When I got to the IRS and I showed the guy the letter, he goes I don't need to see this, we see these everyday,\" she explained.

In a statement--IRS officials said: \"we take this issue very seriously and continue to expand on our robust screening process in order to stop fraudulent returns and protect innocent taxpayers.\"

\"I wish I had the smarts on how to investigate and how to find them,\" she said, disheartened.

CBS 58 received several calls from victims who face a similar situation, if you believe you fell victim to identity theft, call the IRS Identity Protection Hotline at 1-800-908-4490.