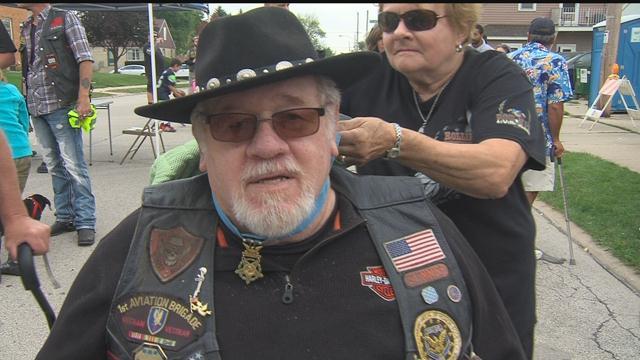 Vietnam Veteran and War Hero Gary Wetzel stunned the crowd when he showed up at a benefit in his honor.

He has been in the hospital for months after a broken pelvis, among other injuries, in a motorcycle crash.

He was heading to Sturgis to receive another honor when the crash happened.

Gary Wetzel Appreciation Day was organized by the husband and wife who own Tracker's Pub and Grub.

They wanted to make sure that a guy who has worked on behalf of many other causes has some extra cash on hand to handle unexpected complications.

They say they know the care he's receiving at the VA is good, but thought, if he had some on reserve it would lessen his stress.

Gary who arrived in a wheelchair said when he learned about the event, he knew he wanted to be there.

"I'm ecstatic," Wetzel told CBS 58 News. "I'm really happy. I'm glad there's a lot of people I know. A lot of people I don't know. They came out to say Gary you're going to make it."

Anthony and Jennifer Winneshiek who own Tracker's (a nick name Anthony picked up as a Marine) say they were inspired by how many answered the call for help.

"This is what we do," Anthony said,"for any veteran looking to come home to a place that feels like their home."

"Gary's a Veteran and a brother," added Jennifer. "I consider him my brother being Anthony's wife. We have just had an outpouring of support. He does things for a good causes himself. So, it's just time we give back."

When asked if Gary will be back on his motorcycle the Vietnam Veteran declared that his bike was being worked on right now.

"You can't keep this old dog down!"