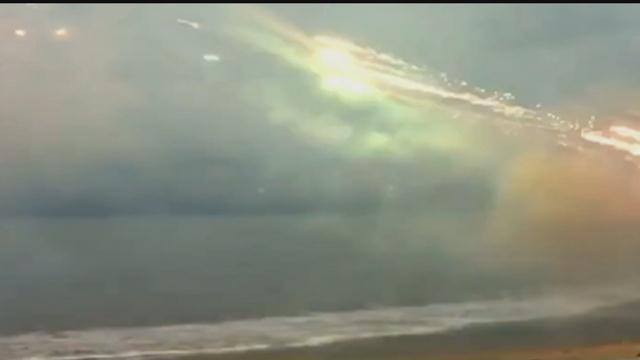 It's amazing video you have to see to believe: a man-made fireworks show on the beach in South Milwaukee.

The activity is illegal, but the man who sparked the viral video said he never meant for it to go as far as it did.

"It was no more than just a fun, also slightly foolish idea," said Alex Spahn. "But, I thought it would be a great time."

Spahn, a South Milwaukee native, told CBS 58 by phone that he used PVC piping, seven large roman candles and duct tape to create a massive fireworks launcher. It fired off 1,001 shots in about a minute.

He said the beach in Grant Park was the safest place to enjoy something he's always loved.

But, the video shared by his friends eventually caught the attention of South Milwaukee police. When Spahn found out they were looking for him, he called immediately to turn himself in.

"I always try to be a good example for people," he said. "I want people to understand that if you ever get into trouble, you should always turn yourself in and you don't want to make matters worse than they already are. That was my philosophy going into this."

Because he apologized and has no criminal record, South Milwaukee police will not give Spahn a ticket.

However, officers do not condone the activity, and Spahn strongly advises others from trying to re-create this, saying it's not safe.

The 24-year-old physics teacher said he feels bad for wasting the police department's time. He plans to donate $100 to them and another $100 to the Milwaukee County Parks Department.