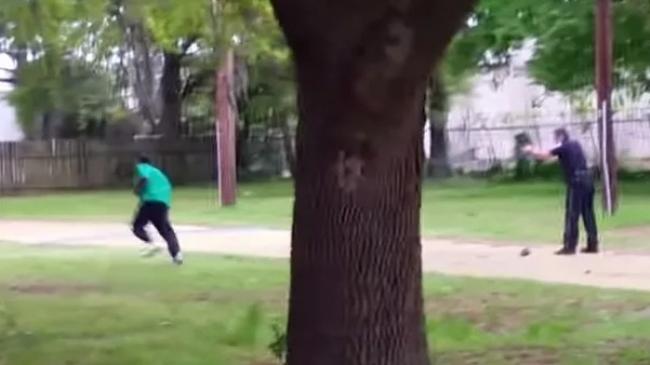 The witness who recorded a South Carolina police officer fatally shooting a fleeing man says he didn't see the man grab the officer's Taser -- an account that doesn't match what the officer told dispatchers.

In two interviews with NBC, Feidin Santana said that he was walking to his job in North Charleston on Saturday morning when he saw Officer Michael Slager chase Walter Scott.

Deciding to see what was going on, he followed and saw the two struggling on the ground, he told NBC's Lester Holt on Wednesday.

\"They were down on the floor ... before I started recording,\" Slager said. \"I remember the police (officer) had control of the situation. He had control of Scott.\"

Santana said he heard the sound of a Taser being used, and that he believed Scott was trying to get away from it.

But Scott never got the Taser or used it on the officer, Santana told NBC on Wednesday and Thursday.

\"He never grabbed the Taser of the police. He never got the Taser,\" Santana told NBC's Matt Lauer on Thursday on \"Today.\"

Santana's cell phone video, which he said began after the struggle on the ground, shows Slager shooting at 50-year-old Walter Scott eight times as Scott, who was unarmed, has his back to him and is running away.

Any words exchanged between Scott and Slager are not audible on the released tape. It's also unclear what happened before Scott started to run away, or why he ran.

The officer initially said that he used a Taser stun gun on Scott and that Scott tried to take his weapon.

Before the officer starts firing at Scott, the video shows a dark object falling behind him and hitting the ground. It's not clear whether that is the Taser.

Later in the video, when Slager approaches Scott's body, he drops a dark object next to the man. Again, it's not clear whether that's the Taser.

It's unknown whether Scott took the officer's Taser, and it's unclear whether the officer picked the object up and moved it closer to the body.

\"Shots fired. Subject is down,\" Slager told dispatch, according to an audio recording. \"He took my Taser.\"

An autopsy of Scott showed that he \"sustained multiple gunshot wounds to the back of his body,\" and his death was the result of a homicide, the Charleston County Coroner's Office said.

Slager is now charged with murder. The FBI is involved in the investigation of the slaying of the father of four.