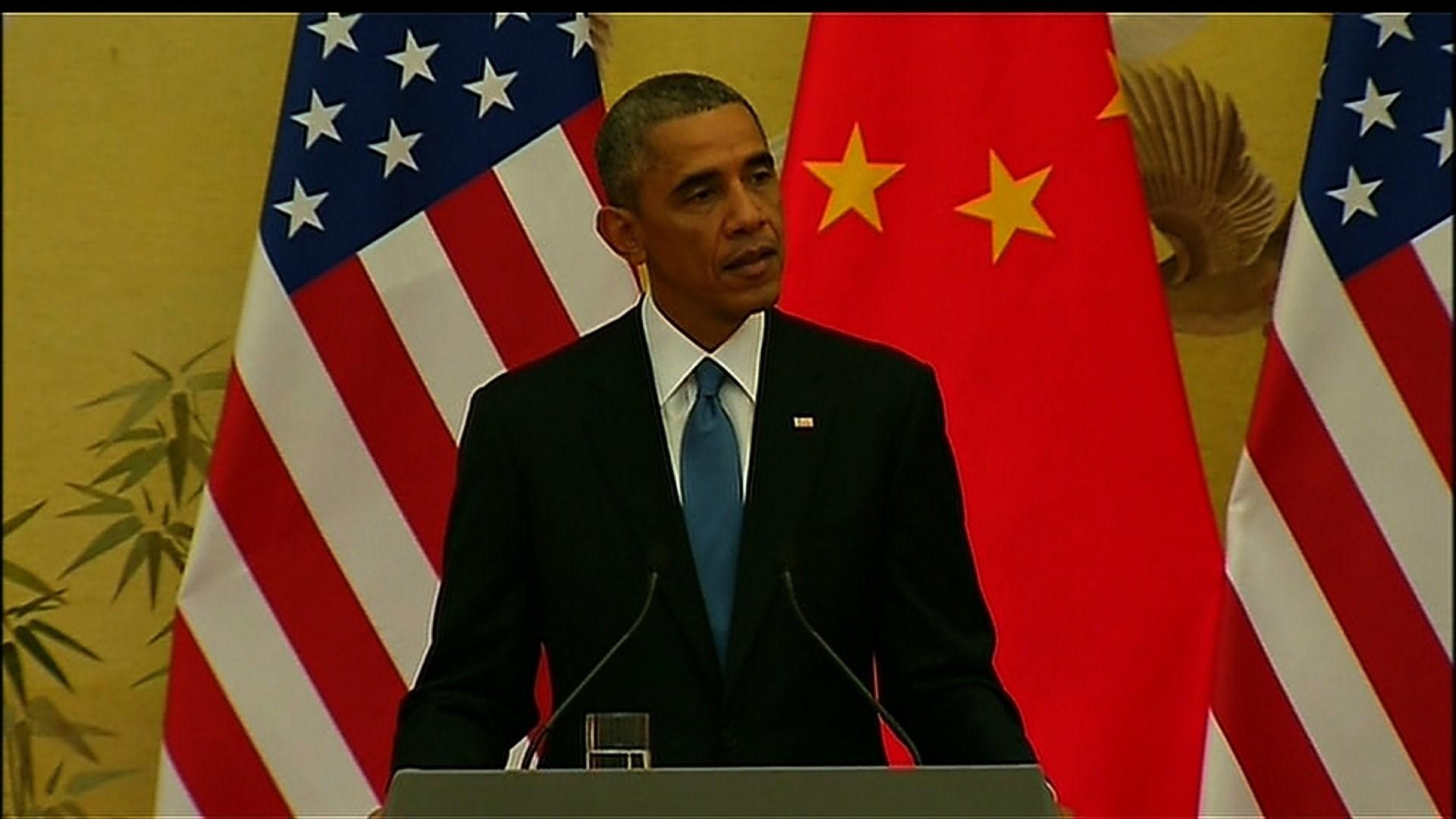 President Obama has asked his national security team for another review of the U.S. policy toward Syria after realizing that ISIS may not be defeated without a political transition in Syria and the removal of President Bashar al Assad, senior US officials and diplomats tell CNN.

The review is a tacit admission that the initial strategy of trying to confront ISIS first in Iraq and then take them on in Syria, without also focusing on the removal of Assad, was a miscalculation.

In just the past week, the White House has convened four meetings of the president's national security team, one of which was chaired by President Obama and others which were attended by principals like the Secretary of State. These meetings, in the words of one senior official, were \"driven to a large degree how our Syria strategy fits into our ISIS strategy.

\"The President has asked us to look again at how this fits together,\" one senior official said. \"The long running Syria problem is now compounded by the reality that to genuinely defeat ISIL, we need not only a defeat in Iraq but a defeat in Syria.\" The U.S. government refers to ISIS as ISIL.

Multiple senior administration officials and diplomats spoke with CNN on condition of anonymity to discuss internal discussions. The White House referred questions about the review to the State Department.

In October the U.S. stressed an \"Iraq first\" strategy with efforts to degrade ISIS in Iraq as the priority and operations in Syria done to shape conditions in Iraq. Washington hoped that would give time for the US to vet, train and arm a moderate Syrian rebels fighting force to combat ISIS, and ultimately the regime of President Bashar al-Assad.

But with the Free Syrian Army struggling in a two-front battle against Assad's forces and extremists from both ISIS and other extremist groups like al-Nusra, U.S. officials recognize the \"Iraq first\" strategy is untenable.

\"Developments on the ground have caused the national security team to collectively conclude we may not have time for Iraq first. In an ideal world you would drive ISIL out of Iraq and pivot to Syria. But if by then the moderate opposition has been smacked and ISIL is still there, that doesn't help,\" a senior administration official said.

Among the options being discussed are a no-fly zone on the border with Turkey and accelerating and expanding the Pentagon program to vet, train and arm the moderate opposition.

Turkey has called for a no-fly zone, both to protect its border and to provide relief to Syrian rebels facing airstrikes from the regime, but officials said so far has been vague about what troops and other assets it is willing to contribute to the effort.

The administration has asked Congress for $500 million to train and equip 5,000 vetted rebels within one year.

But efforts to expand the program to build Syrian rebel forces may also be stymied by slow and complicated of vetting the fighters. More than four months after announcing an effort to train and equip the moderate Syrian opposition, Pentagon spokesman Rear Admiral John Kirby told CNN the vetting process had not even begun and logistics are still being worked out with the Turks and Saudis, who are hosting the training.

\"The vetting hasn't started. Once it does start, that will be about a three- to five-month process and then it's about 8-9 months of training after that,\" Kirby said in an interview with CNN last week. \"So we still got a ways to go.\"

The review comes as the military starts meeting with more than 30 countries to \"further develop and refine military campaign plans to degrade and defeat\" ISIS, according to a statement from US Central Command, which is overseeing US military efforts in Syria and Iraq.

Many of the president's top national security advisers, including Secretary of State John Kerry, have long argued that Washington's political strategy was unrealistic.

Defense Secretary Chuck Hagel sent a blunt memo to National Security Advisor Susan Rice in October which a senior U.S. official told Barbara Starr was \"expressing concern about overall Syria strategy\" and expressing a fear that the U.S. is risking its gains in the war against ISIS if adjustments are not made. The official said the focus of the memo was the \"need to have a sharper view of what do about the Assad regime.\"

\"It has been pretty clear for some time that supporting the moderate opposition in the hopes of toppling Assad, isn't going to work,\" another senior official said.

In response to the revelations about the Hagel memo, the White House spokesman said his advisers would be \"constantly assessing\" the strategy.

\"That means they want to consider a wide range of opportunities to make sure we're doing everything we possibly can to protect and defend American interests around the world,\" spokesman Josh Earnest said in an interview with CNN on October 31.

The U.S. is also trying to preserve a fraying anti-ISIS coalition. Many many Arab states have expressed frustration with what they perceive as an ambivalence by the U.S. toward getting rid of Assad. Secretary of State John Kerry and General John Allen, the U.S. envoy to the anti-ISIS coalition, have reported back to the White House that key allies like Saudi Arabia, United Arab Emirates and Turkey, are calling for a framework for a political transition in Syria.

\"What really tipped this into a more vigorous reassessment was hearing from our coalition partners that they are not convinced by the Syria part and this strategy only works if there is a more coherent Syria piece,\" said a senior official

Efforts by the U.S. and Russia to strike a deal between Assad's regime and the Syrian opposition forces broke down in January after a long-awaited and ultimately unsuccessful peace conference in Switzerland.

Now officials and diplomats said Kerry has in recent months intensified discussion with Saudi Arabia, the United Arab Emirates, Turkey and Russia about the possibility of a diplomatic tract to transition President Bashar Assad and his inner circle out of power, while maintaining large parts of the regime and institutions of the state.

But any such transition could take time.

\"It's not going to be tomorrow and I don't think anyone even believes that is physically possible. But even if it is a six or 12 month plan as long as it has an exit for Assad,\" one senior Arab diplomat said. \"But we are glad that we finally see a meeting of the minds with the US that there needs to be a rethinking of the strategy.\"

American officials and Arab diplomats said that while Russia has tacitly endorsed the idea of a Syria free of Assad, Moscow has done little to effect change on the ground.

\"The Russians are not our friend here,\" one of the senior administration officials said. \"They have given vague expressions of empathy but that is not exactly the same as saying we are with you and are going to rid of him. They are still arming Assad and providing him direct support.\"

Kerry has also raised the topic with Iranian Foreign Minister Javad Zarif, officials said. Kerry has met several times in recent months to hammer out a nuclear deal ahead of a November 24 deadline, which officials stressed was the main topic of discussion and was not linked to any potential cooperation in Syria.

Last month President Obama sent a letter to Iran's supreme leader Ayatollah Khamenei describing a shared interest in combating ISIS in Iraq and Syria, but it was unclear whether the letter made mention of the three-year civil war in which Iran has backed President Assad.

Officials pointed to a debate within the Iranian regime about Assad's fate, but there is little sign that the supreme leader or the powerful Iranian Revolutionary Guards Corps are interested in getting rid of him.

\"The moderates are not calling the shots in Syria,\" an official said. \"The Iranians have come up with plans like constitutional reforms and ultimately an election, and it is better than nothing, but it still doesn't include Assad going and it is not the basis for an agreement.

Arab diplomats have held out hope that if Saudi Arabia and Russia can agree on a political framework, Iran may rethink its insistence that Assad must remain in power and strike a deal on Assad's fate. Saudi Arabia is the dominant country in the region pushing for Assad's ouster

\"It is possible if Russia agrees, the Iranians will feel they are the only ones that who have not played a productive role,\" one Arab diplomat said. \"We know if we agree it will be the least common dominator, where you maintain whoever you can from the regime that doesn't have blood on their hands. That is something we believe the Syrian people can accept. \"

Officials and diplomats said efforts by UN Special Envoy for Syria Staffan de Mistura to secure a series of local ceasefires between the regime and Syrian opposition could help strengthen the administration's efforts to speed up training of the Syrian rebels and Kerry's diplomatic efforts to diplomacy to reach a political transition.

The United Nations says that De Mistura has proposed incremental freezes in fighting, starting with the city of Aleppo, so that neither side takes advantage of a lull in fighting. A senior UN official described the effort as \"very preliminary,\" but said de Mistura hopes to increase \"frozen\" areas and \"knit them together,\" which can create the atmosphere for a broader political agreement.

\"This is creating the atmosphere from the bottom up,\" one senior UN official said. \"You don't have to deal with the huge issues of the future of Assad. You can start dealing with a political arrangement in a place like Aleppo so you don't have to use violence. This would be a way to reduce the suffering and the killing and destruction in the short term, which only helps ISIS.

Former Ambassador to Syria Robert Ford, who left his post in February out of frustration with the administration's policy said any reassessment of the straegy in Syria must also reconsider the coalition air campaign in Syria, which is squeezing the beleaguered opposition even further.

\"The administration needs to have an honest assessment of whether or not its material assistance to the moderate opposition in Northern Syria and the manner in which it has constructed airstrikes in eastern Syria has empower or disempowered the same moderate opposition upon which it will it will depend to contain the Islamic state in Syria as well as play a vital role in achieving an eventually political solution in Syria.,\" Ford said. \"The air campaign so far has infuriated the Syrians fighting the regime. For the first time since the Syrian uprising started in 2011 they are burning American flags because they think we are helping the regime instead of helping them.\"