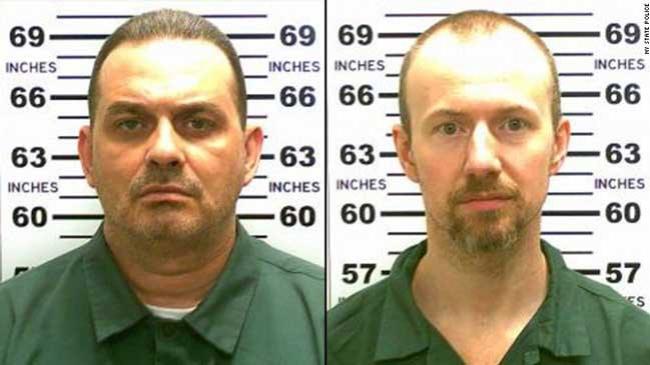 MALONE, N.Y. -- The nearly three-week-long manhunt for two convicted killerswho escaped from an upstate New York prison appears to have reached a critical point, with one of the fugitives reportedly shot.

A law enforcement source told CBS News that Richard Matt was shot by Border Patrol Friday afternoon in Malone, New York, near the Canadian border and about 40 miles away from the prison. Details of his condition were not immediately available.

The source said officers were still pursuing David Sweat, who used power tools to break out of the Clinton Correctional Facility in Dannemora, New York with Matt on June 6.

Hundreds of law enforcement officers have been hunting for the pair since their escape, canvassing the state from the Pennsylvania state line to the Canadian border. Malone is located about 10 miles from the border.

Two employees of the prison, guard Gene Palmer and Joyce Mitchell, an instructor in the tailor shop where Matt and Sweat worked, have been charged with assisting in the escape. Both have pleaded not guilty.

Sweat, 35, was serving a life sentence without parole in the killing of a sheriff's deputy. Matt, who turned 49 on Thursday, was doing 25 years to life in the kidnapping, torture and hacksaw dismemberment of his former boss.