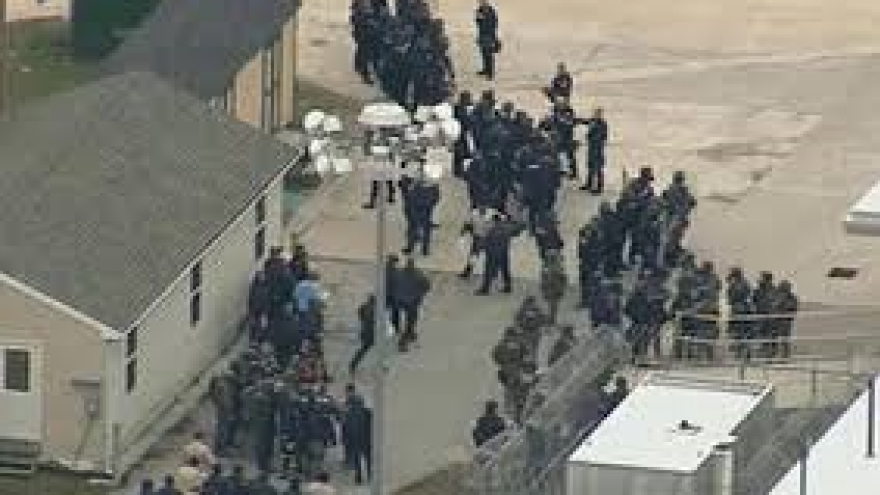 SMYRNA, Del. -- Inmates at a Delaware prison took four corrections department workers hostage Wednesday, a move the inmates told a local newspaper was due to concerns about their treatment and the leadership of the United States.

The hostage situation drew dozens of officers and law enforcement vehicles to the James T. Vaughn Correctional Center in Smyrna and prompted a statewide lockdown of all prisons. One hostage was released Wednesday afternoon and another was released hours later, leaving authorities negotiating into the evening for the last two being held.A preliminary investigation suggests the incident began around 10:30 a.m. when a correctional officer inside Building C, which houses over 100 inmates, radioed for immediate assistance, Delaware State Police spokesman Sgt. Richard Bratz said. Other officers responded to help, and the employees were taken hostage, he said.

Bratz initially said five employees were taken hostage, but authorities at a later news conference said the number had been revised to four.

Robert Coupe, secretary of the Delaware Department of Safety and Homeland Security, said 27 inmates also had left the building over the course of the evening.

Authorities said they didn’t know whether the inmates had been held against their will. The Department of Correction said in a statement to CBS News on Wednesday they were responding along with state police to a hostage situation. A DOC spokeswoman said an emergency situation was reported at the Smyrna prison late Wednesday morning. The facility was placed on lockdown, as were all prisons in the state per DOC policy. Spokeswoman Jayme Gravell had provided few details but described the situation as an isolated incident, adding that there was no threat to the public.

Gravell said firefighters were called to the scene after reports of smoke, but were being held on standby. An alarm was sounded around 11:30 a.m., according to CBS Philadelphia.

Video from above the prison Wednesday afternoon showed uniformed officers gathered in two groups along fences near an entrance to the prison. Later, video showed several people surrounding a stretcher and running as they pushed it across the compound. People could be seen standing near a set of doors with an empty stretcher and wheelchair.

According to the department’s website, the prison is Delaware’s largest correctional facility for men, housing about 2,500 inmates. It houses minimum, medium, and maximum security inmates, and also houses Kent County detainees awaiting trial. The prison opened in 1971 and was the site of the state’s death row and where executions were carried out. In 2004, an inmate there raped a counselor and took her hostage for nearly seven hours at the Smyrna prison, according to an Associated Press report at the time. A department sharpshooter later shot and killed 45-year-old Scott Miller, according to the report, ending the standoff.

The Correctional Officers Association of Delaware reported that a corrections officer was assaulted there last week. In an email on Saturday the association said that guards were removing dinner trays when an inmate threatened an officer and squirted an unknown liquid on the officer’s upper torso and arm. The email said about two dozen inmates had been moved to a higher security area earlier that day and refused to eat dinner.

A lawsuit was filed against the facility for its treatment of mentally ill inmates in 2015, reported CBS News’ Chip Reid. That case was settled in September.

In a federal report released in December, Delaware was ranked fifth among all states for overcrowding in its prison system. The state also has the third highest percentage of inmates in solitary confinement.