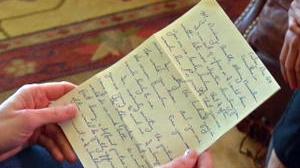 (CBS NEWS) A Colorado woman was looking to buy old records her mom used to sing along to. But she ended up finding 70-year-old love letters from World War II. Then, she set out to find the man who wrote them, \"CBS This Morning: Saturday\" co-host Vinita Nair reports.

Ilene Ortiz of Westminster, Colorado, recently found a letter tucked away in a vinyl record she purchased at a local thrift store.

Dated January 1945, the letter is from a 20-year-old Bill Moore -- serving overseas in Patton's army -- to his then girlfriend Bernadean.

\"My darling, lovable, alluring Bernadean,\" it reads. \"You are so lovely darling, that I often wonder how you are mine.\"

Ortiz asked a local news channel to find the couple, who would marry and have three children, including Melinda Gale.

\"I can't believe Ilene found this,\" Gale said. \"Most of their dating was through letters in the war. And that was the one thing I remember her talking about. It meant everything to get that letter. And we can't find them. So this is the only original we would have.\"

He lives in an assisted living facility for veterans.

\"When you're apart for that reason, not knowing if and when you'd ever see that person again, every chance you got to communicate was just wonderful,\" he said.

\"It really hit me that we were seeing the true depth of my parents' love that, as children, we knew was there, but you don't hear it,\" their daughter Melinda said. \"Their love sets such a beautiful example of what life can be.\"

Bill and Bernadean were married for 63 years.