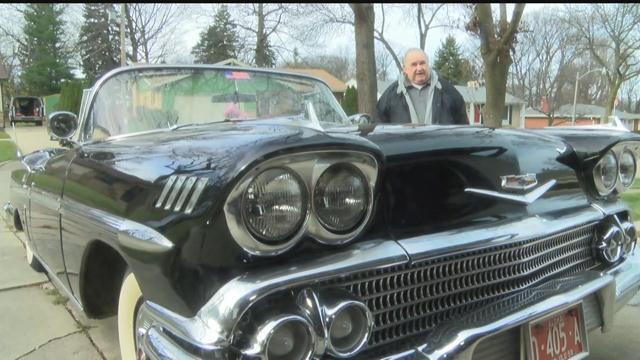 Despite all that snow in our forecast, organizers of this year's Milwaukee Holiday Parade say there is zero chance they'll call it off.

But people planning to head out to the streets to watch the parade might have a few extra things to think about.

If there is more than four inches of snow on the ground drivers will have to watch for signs that indicate where they won't be able to park because of the weather event.

Other drivers who are actually participating in the parade also say they're having to make even bigger changes to their plans.

A 1958 Chevrolet Impala feels like it takes up the whole road when it's rolling - which Richard 'Dick' Doro says makes it perfect for a parade.

He lists a few of his past passengers.

"[the car has] been in the family a little over 35 years. My father bought it," Doro said.

"At the time it gave him six Chevrolets. plus his other car. And a truck," he said with a laugh.

"As his health went down, I started driving but he'd always call and say 'Hey, the Christmas parade's coming. You want to drive?'" Doro said.

That means the family and their vehicles have been part of holiday parades for decades...

...and then this year's forecast came out.

"Snow and salt is what you don't want. basically, it's the salt. It's not the snow but it's the salt on the roads," Doro said.

"Any salt that gets up in there it just sits and starts to eat away at the paint," Doro said.

Other classic car drivers are also pulling their vehicles from the parade this year as a precaution, Doro said.

But that doesn't mean this years 'guests of honor' will being going out on foot. Parade organizers also put out a call for more modern vehicles.

"All the parades are always about showing off the vehicle. You don't really care who you carry. But the nicest thing is, even now, somebody is yelling 'Hey, nice car!'" Doro said.

Parade organizers have also been working with the bus companies bringing in the high school marching bands. They've worked out a deal where the kids will be able to stay on the bus as long as possible before they have to go out onto the snowy streets.

The parade starts at 9:30 AM on Saturday following East Kilbourne Avenue. For more information click here.