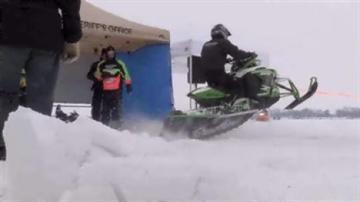 RACINE CO. -- We expect rescue squads to be there with the proper tools and equipment when we need them the most.  But some agencies, especially ones outside of major cities, often struggle to get the funding for those tools.

The Racine County Dive Team came up with a way to mix fundraising with entertainment.

\"Well, you just gotta hang on and hope everything holds together on the machine,\" snowmobile racer Don Avery said.

Pretty good advice when cruising over 100 MPH on ice.  The thrill of speed brought around 80 racers and hundreds of fans out to Eagle Lake in Racine County Saturday.

\"It's always a fun thing in Wisconsin, people love to come out and play,\" Kansasville Fire Chief Scott Remer said.

But Saturday wasn't just about entertainment.  The dive team hopes to turn all the profits into new technology.

\"It's like an underwater robot and our eyes and ears that we can send 50 to 100 feet and cover a much larger area in a much quicker time than we would sending divers,\" Remer said.

That sonar robot can cost up to $60,000.  The team raised a few thousand last year and hope to triple that.

\"Doing more with less these days and budgets being cut, we just can't get that new equipment we need,\" Remer said.

The dive team is made up of members of the Racine County Sheriff's Office and nearly every other rescue squad in the county.

\"Water recreation is very important with the Racine County residents,\" Lt. Brad Friend said.  \"We want to make sure that we have a team that's in place and equipped to handle any water emergencies that come about.\"

This winter has been a fairly slow one for the dive team.  They've only been needed twice so far.  But racers are glad their entry fees are going to protect their neighbors.

\"Helping them out, getting new tools for rescuing people and stuff like that,\" racer Kyle Hegemann said.  \"That's all for a good cause.\"

\"We're passing that message, message of safety, and trying to have a little fun out here as well,\" Friend said.

With the success of the first two years of the radar run, organizers say they plan to hold a third event the first Saturday in February 2015.