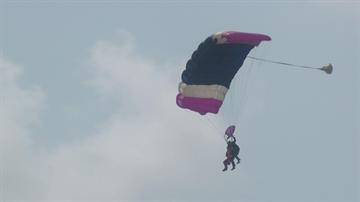 JEFFERSON- A sky diver was injured on Sunday morning after she had parachute complications.

An official at the Wisconsin Sky Diving said at around 11 a.m. her parachute somehow became tangled and she took a hard landing.

Flight for life was called in as a precaution and she was taken to the hospital from the Fort Atkinson airport.

Because flight for life was called, the Jefferson County Sheriff's Office had to shut down part of Highway 26 in the South bound lane.

CBS 58 told the sky diver has done over 1000 jumps, is an instructor, and a videographer.

This Wisconsin Sky diving Center said that they have checked in with the hospital and that they're told the sky diver is expected to be survive.