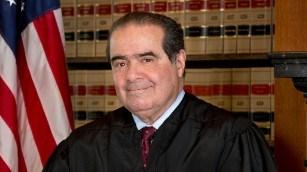 (CNN) Three days after Justice Antonin Scalia was found dead in his room at a luxury hunting ranch in remote West Texas, the conspiracy theories about his passing continue to swirl. A local judge's decision not to order a post-mortem examination have triggered a round of questions ranging from scrutiny of the procedures to the bizarre. Republican presidential candidate Donald Trump on Monday referenced a report from the scene about Scalia's body when asked on a radio show to comment on the possibility that Scalia may have been murdered and whether there should be an independent investigation into this death.

"They say they found a pillow on his face, which is a pretty unusual place to find a pillow," Trump said on conservative radio host Michael Savage's show "The Savage Nation." Savage called for "the equivalent of a Warren Commission"-style investigation into Scalia's death.

In a statement Tuesday, the owner of the ranch clarified to CNN what he meant when he told the San Antonio Express the judge was found with a "pillow over his head."

"I think enough disclosures were made and what I said precisely was accurate. He had a pillow over his head, not over his face as some have been saying," John Poindexter, owner of the Cibolo Creek Ranch, where Scalia was found, told CNN over the phone. "The pillow was against the headboard and over his head when he was discovered. He looked like someone who had had a restful night's sleep. There was no evidence of anything else."

A U.S. law-enforcement source told CNN: "There was absolutely nothing out of the ordinary in Justice Scalia's room. There were no signs of foul play."

The source added that law-enforcement agents know know the difference between someone dying in their sleep and being suffocated to death with a pillow.

But despite the assertions of law enforcement and local justice officials that all signs pointed to death from natural causes, questions about the process they followed have flared on social media.

The former head of criminal investigations for the Washington, D.C., police, poured fuel on the conspiracy theory fire.

"As a former homicide commander, I am stunned that no autopsy was ordered for Justice Scalia," William O. Ritchie wrote in a Facebook post on Sunday, according to reports. After seeking to cast doubt on the conclusion of the deputy U.S. marshals who responded to a call from the ranch, he added, "My gut tells me there is something fishy going on in Texas."

Ritchie told CNN on Tuesday that there is still time to act because Scalia isn't lying in repose at the Supreme Court until Friday and his funeral isn't until Saturday."At least you have a trained medical professional look and make an examination," Ritchie said. "There is sufficient time to do that."

The conspiracy theories surrounding the death run the gamut. In an "emergency transmission" posted on Facebook, Infowars' Alex Jones said, "The question is was Anthony (sic) Scalia murdered?" while the site Harddawn.com speculated that "the Illuminati" might have been responsible, calling Leonard Nimoy — who died last year — "the wild card in this equation." And a number of sites have made reference to a so-called "heart attack gun," a secret CIA weapon that could, per their claims, have been used to kill Scalia.

At issue are a series of decisions made by the Texas county judge who took charge in the aftermath of Scalia's passing when two justices of the peace sought out by those at the ranch could not make it to the site.

Reached by The Washington Post late Monday, Brian Monahan, a U.S. Navy rear admiral and the doctor who had reportedly cared for Scalia, declined to comment, citing "patient confidentiality."

Guevara was within her rights to declare Scalia dead without having seen the body under Texas law, the Washington Post said.

The U.S. Marshals Service coordinates with the Supreme Court police to provide security for the justices but they may decline protection. In this instance, the USMS detail was declined, so USMS personnel were not present at the ranch. Deputy U.S. Marshals from the Western District of Texas responded immediately upon notification of Scalia's death.

Members of the high court do not routinely make their health information public, like presidents and presidential candidates.

Guevara did not order an autopsy -- the same decision, according to The Post, that the Scalia family made when speaking to the El Paso funeral home that received his body.

"Frankly, I'm surprised there was not an autopsy," Turley told CNN's Dugald McConnell. "I was also surprised at how casual the treatment of the scene appeared to be. I mean, you had someone pronounced dead over the description of marshals on the phone. This is not just anyone, this is a member of the U.S. Supreme Court, one of the highest officials in the judicial branch, therefore one of the highest officials in our government."

Asked about the conspiracy theories, Turley said, "There's obviously an insatiable desire from many people to look at facts and see something untoward or suspicious. The Internet doesn't help that ... We are living at a time where conspiracy theories are a virtual sport. The fact that you had a justice who died and was left in his room for hours doesn't mean this is some Hollywood script. What it probably means is that a justice passed away in his room and was left for hours. Nino Scalia did have medical problems, he was 79 years old."