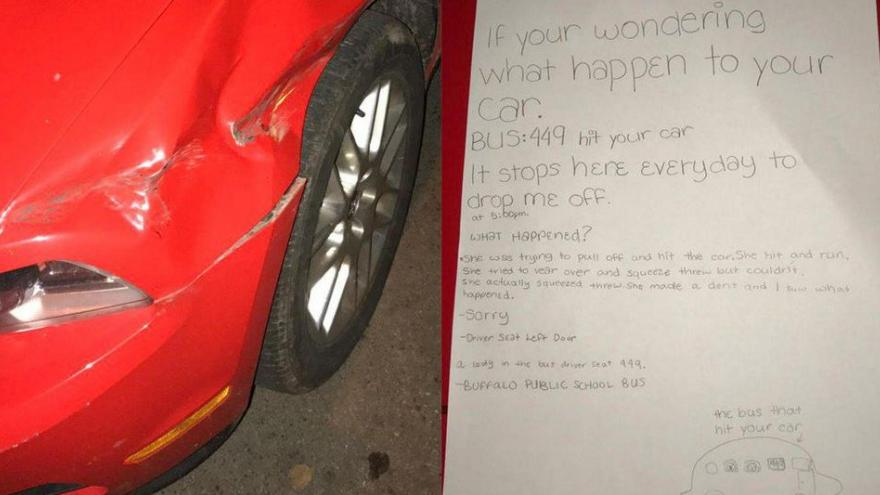 BUFFALO, N.Y. (CBS News) — Canisius College senior Andrew Sipowicz has a tale to tell that is truly unique -- a heartwarming story about a hit-and-run. He said it began the day he discovered a dent in his Ford Mustang.

"It was bashed in pretty good," Andrew said. "Then I saw the note. I wasn't expecting that at all, that it came from a sixth-grader."

Obviously, 11-year-old Ziarra Griffin didn't make the dent, but she did make it better with a note she tucked under his windshield. It read, "If you're wondering what happened to your car, bus 449 hit your car. It stops here every day to drop me off. She hit and run. Sorry."

Ziarra closed with a sketch of the getaway vehicle.

As a result of her artistry and honesty, the bus driver was held accountable and Andrew is now getting his car fixed.

"I could have acted like it didn't happen, but I chose to do something about it because my mom always said, 'When you see somebody doing the wrong thing, you have to do the right thing,'" Ziarra said.

But her mom, Tocarra, refuses to take all the credit. In fact, Tocarra admits she wasn't exactly supportive that day. Instead, she was thinking they should get out of there.

"I don't want anyone to think it was me," Tocarra said. "My daughter taught me how to stay kind, stay compassionate, always knowing the right thing is always the right thing."

Andrew said Ziarra taught him that as well, which is why he just had to meet her.

"I couldn't believe you left me that note. When I first saw my car, I was angry and then I saw your note and it changed my entire mood," Andrew said.

"To know that there are people out there with that kind of integrity and honesty, it's something I'm going to remember for the rest of my life."

Again, her mom credits nature over nurture, but she is clearly doing something right. Because raising kids who stand up to injustice is no accident.