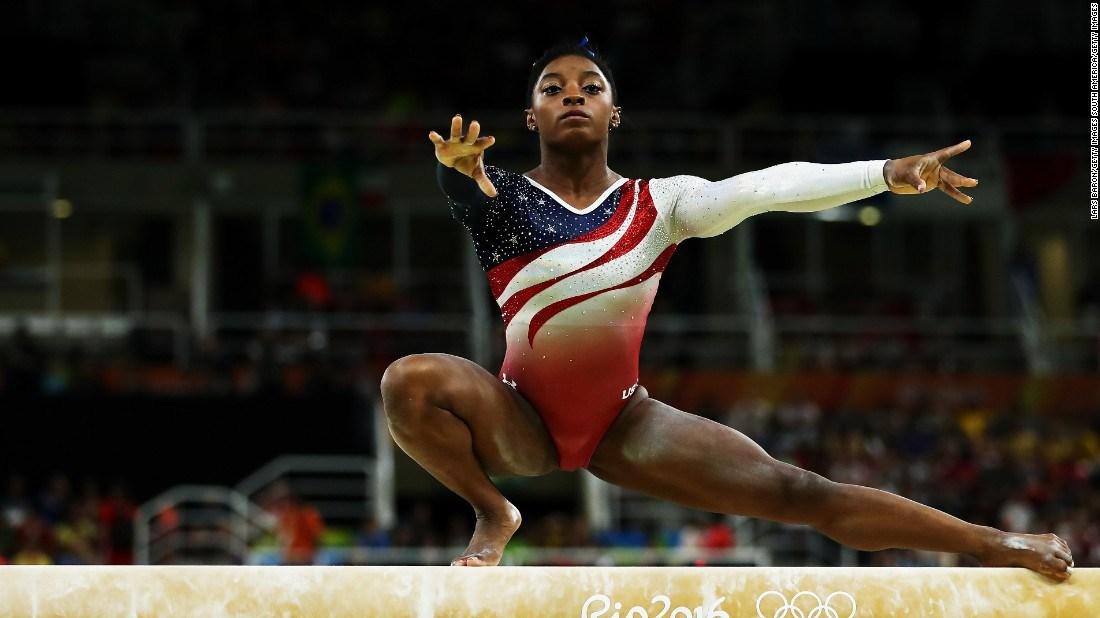 (CNN) There are some athletes which struggle to live up to the hype -- but in Rio it was the hype which failed to keep up with Simone Biles.

The US star showed just why she's the talk of town with another sublime showing to win gold in the women's all-around final Thursday.

Biles, competing at her first Olympic Games, made a mockery of those who doubted her ability to cope with the occasion and added pressure of being the outstanding favorite.

Biles took gold ahead of US teammate Aly Raisman and Russia's Aliya Mustafina after finishing off with a dazzling floor routine.

The 19-year-old not only confounded her opponents but appeared to do similar to the laws of gravity.

Yes, there was a moment where she seemed human -- her routine on the bar was below her best -- but even that is beyond most.

By the time she left the floor after recording the highest score of the night, 15.933, Biles had already achieved sporting immortality by becoming the first woman in 20 years to win back-to-back world and Olympic all around titles.

"Every emotion hit me at once so I was just kind of a train wreck," Biles told reporters.

"Everything was going through my head but mainly it was like I had finally done it and when that hits you, you can't really stop the emotions."

Read: Biles to dominate in Rio

Biles, already an OIympic champion after leading the "Final Five" to gold in the team event, was briefly challenged by European champion Mustafina.

But any thoughts of the Russian recording a shock victory were quickly extinguished as Biles produced a fine beam effort to take her clear of her opponents.

A three-time world champion in the all-around and a four-time U.S. all-around champion, Biles has won 14 world medals (10 gold, two silver, two bronze), the most ever for a U.S. female gymnast.

Biles could still win three more gold medals before the Games with the teenager set to challenge in the beam, vault and floor.

Her triumph makes her the fourth American in succession to win the title -- following the successes of Carly Patterson, Nastia Liukin and Gabby Douglas -- which is the longest winning streak by a country in the Olympic discipline.

But efforts to draw comparisons between her and other world stars were swiftly played down by the teenager despite her celebrity status.

"I'm not a celebrity. I'm just Simone Biles, but it's amazing to be recognized for all of this success for myself and for team USA," she added.

"I'm not the next Usain Bolt or Michael Phelps, I'm the first Simone Biles."

"To me, I'm just the same Simone. I just have two Olympic gold medals now. I feel like I did my job tonight."