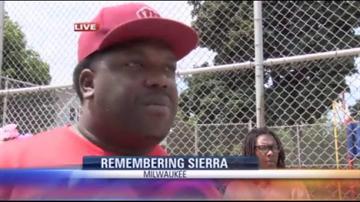 MILWAUKEE-- The city of Milwaukee is mourning the death of Sierra Guyton, 10.

The child passed away early Sunday morning after nearly two months of fighting for her life at Children's Hospital.

In May, Guyton was playing at the Clarke Street School playground across from her home, when a gunfight broke out.

The child was hit in the head.

Guyton's family is holding a balloon release and vigil in honor of their loved one at 7:45 p.m. Monday at the playground at 28th and Clarke.

Mayor Tom Barrett said the tragedy is the result of senseless, insane violence plaguing the city.

CBS 58's Marshanna Hester spoke with Sierra Guyton's father, Onjuan, about he and his family are coping and the message he has for the community.