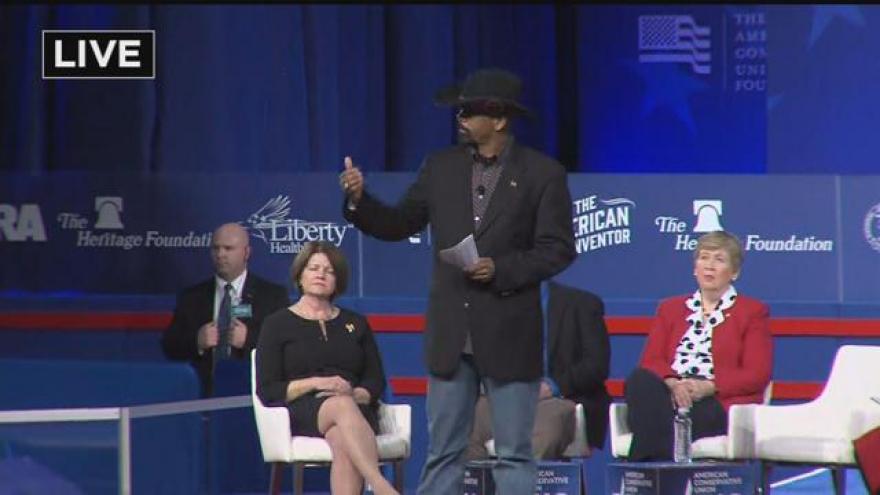 "Sanctuary cities are havens for criminal activity," Clarke told the crowd. "They provide cover for criminal illegal aliens to continue to prey on law abiding people and illegal immigrants in this country with impunity."

Clarke believes there is a vast amount of under reporting of crimes because illegal aliens who are engaged in criminal activity target other illegals because they don't want their own status to come to light.

Governor Scott Walker was on stage earlier in the morning.

He urged fellow Republicans to not get bullied at Town Hall Meetings.

He said they must have the strength to take a stand as he did during "Act 10" protests back in 2011.

"At the time, they just didn't limit themselves to the State Capitol," recalled the Governor. "They actually went to the executive residence. And eventually, the found their way to our family home in Wauwatosa."

The Governor said he and his family endured threats and disruptions for months.

He remarked that the tide finally changed when protesters disrupted a fundraiser for Special Olympics.

His advice was to say the course.

"It was a vivid reminder of what we learned in Wisconsin. And that is to do to what you said you were going to do. To go big. To go bold. To actually go through with promises you made throughout the campaign."

Constituents have been showing up in the hundreds to local meetings of Republicans.

They say they are angered by a lack of response from their representative when they call their office.

The main issue of contention lately has been movement to repeal Obamacare with no clear replacement.

Paul Nolette, Assistant Professor of Political Science at Marquette University says it's quite unusual for Wisconsinites to see so many familiar faces gain national attention at the same time.

"It's amazing that there's so many Wisconsin politicians that have national visibility already," Nolette said in a liver interview on the CBS 58 News at 4. "CPAC really invites national, prominent conservatives.  So, Walker and Clarke might be looking to strengthen their national profile."

Clearly Governor Walker has some lessons learned from his short, failed run for the White House.

"He did not have a great time on the national stage during his presidential run and this is part of repairing his image."

Nolette says Sheriff Clarke seems to be fairing better with the glare of the spotlight and the scrutiny that comes with it.

"He knows how to take advantage of the controversial things he says. This has rocketed him up to national prominence."