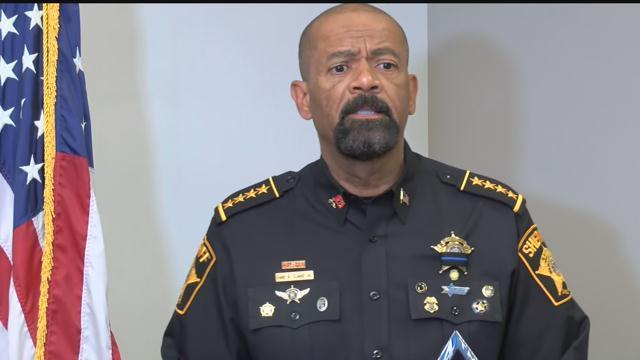 Sheriff David A. Clarke Jr., on a flight to Charlotte, NC from Milwaukee on Saturday afternoon, detained a passenger.

According to the Sheriff’s Office, the man was harassing flight crew and intimidating passengers.

Clarke intervened midway through the flight when a man became allegedly intoxicated, loud and profane and began harassing flight crew and passengers.

According to the Sheriff’s Office, the man allegedly started to argue with a flight attendant.

The sheriff left his seat and asked if everything was all right and told the man to “chill out.”

Clarke directed the flight attendant to radio airport police to be standing by on arrival.

According to the Sheriff’s Office, the allegedly man continued his obnoxious behavior and on approach to landing he got out of his seat.

The flight attendant told him to return to his seat.

According to the Sheriff’s Office, while the plane taxied to the gate he began taunting the Sheriff, asking him what he was going to do about it. Several times during the flight he allegedly yelled to everyone that Sheriff Clarke was on the plane.

Sheriff Clarke ordered him to sit down and when he refused, Clarke shoved the allegedly unruly passenger face down and pinned him against the seat and held him there until the flight arrived at the gate.

A police officer boarded the flight and the Sheriff asked for her handcuffs.  The airport police took hold of the suspect and escorted him off the plane

Charlotte police charged Preston Bluntson, age 36, of Milwaukee, with ‘Intoxicated and Disruptive in Public,’ and reported that he was not at all cooperative during the intake process.

According to Sheriff’s Office, Clarke was also disappointed that there was no air marshal on board who could have intervened.