SHEBOYGAN FALLS, Wis. (CBS 58) -- Criminal charges have been filed against a Sheboygan Falls mother accused of killing her 8-year-old son.

Officers made contact with a man, identified as Witness 1, who appeared visibly upset and told officers to, "get in here." He directed officers to the living where they located 8-year-old Oliver Hitchcock laying on his back; he was pale white and bluish in color. Officials did not observe any bleeding or wounds on Oliver, but observed bruising on his neck consistent with having been strangled

Oliver was taken to a hospital where he later died from his injuries.

After entering the apartment an officer asked Witness 1, "where is she." referring to a woman with a knife. They were pointed to a rear bedroom where Natalia Hitchcock was located. According to the complaint, Witness 1 was asked if he was injured at all and he replied, "she tried to stab me."

Officials say Witness 1 indicated Hitchcock stabbed herself, but did not think she stabbed anyone else. Law enforcement later learned there was another 11-year-old child inside the apartment.

According to the complaint, Witness 1 stated Hitchcock's mother lived in Russia and he was worried about Hitchcock's mental state as she watched TV with the war between Russia and Ukraine. He added things became "very serious" the prior three to four days. The complaint says Witness 1 stated Hitchcock wanted to buy survival gear such as a camping stove, fuel, knives and guns. He said no to the guns, the complaint says, but did purchase extra food and a camping stove and fuel to make her feel safe. Witness 1 reportedly said the war between Russia and Ukraine amped up Hitchcock more than ever and she started to drink alcohol. He advised that Hitchcock also complained that she could not book a flight to Russia to see her parents, which made her angry. He told officials Hitchcock was worried people were going to be coming from a bigger city to attack them.

On March 30, according to the complaint, Witness 1 stated both children were home on spring break and playing on the computer. At one point before he took a nap Hitchcock's mother called to speak with her. The complaint says his first memory after waking up was his 11-year-old child saying, "Oliver is dead." He advised the 11-year-old looked scared and frightened.

Witness 1, according to the complaint, picked up Oliver's body and took him to the living room and began performing CPR on him and called 911.

The complaint says while tending to Oliver, Hitchcock had been walking around the apartment with a knife dazed, saying she was going to kill everyone in the house.

When officers arrived, they escorted Hitchcock out of the apartment and observed a small puncture wound to her chest. When asked how she sustained the wound, Hitchcock reportedly said it was self-inflicted and stated she tried to "cut her heart."

The complaint says an officer asked Hitchcock what happened and she stated "someone was controlling her mind and she had been poisoned." She reportedly kept using the phrase, "she had a brain fog." She said, according to the complaint, that she had been trying to save her sons from being abused. When asked if she had any mental health issues, Hitchcock reportedly said no. When asked what happened to her son, Hitchcock allegedly said, “I suffocate him.” When asked why she suffocated her child, Hitchcock reportedly said, “I did not want him to be abused.”

Hitchcock was arrested and interviewed. The criminal complaint says she indicated she had not been sleeping the past five days, explaining that within the prior five days she gotten approximately eight hours of sleep. She said she did not have control of her thoughts and heard voices in her head, the complaint says.

Hitchcock reportedly said she experienced back pain so she took a Tylenol bottle, poured half of the pills into a cup filled with orange juice and once the pills dissolved she drank the juice to fall asleep and "never wake up." She reportedly said at the time Witness 1 had been taking a nap and her children were playing video games, she began to have thoughts that the Russian government was going to take her children and abuse them. She also reportedly said she believed Witness 1 was trying to sell her and the boys to the dark web.

Officials later determined Hitchcock had a critical amount of Tylenol in her system.

The complaint says Hitchcock stated she believed it best to take Oliver's life because he was the youngest and most vulnerable. She allegedly said she believed Oliver would not have been able to defend himself if he had gotten abused and she thought it better to kill him rather than watch him be abused.

Hitchcock then reportedly admitted to strangling Oliver with both hands. Once she observed Oliver's face lose color and he lost consciousness, she grabbed a kitchen knife and began to stab herself in the chest. The complaint says when Hitchcock was asked if she intentionally wanted to hurt Oliver, she said yes because she did not want to see him abused. 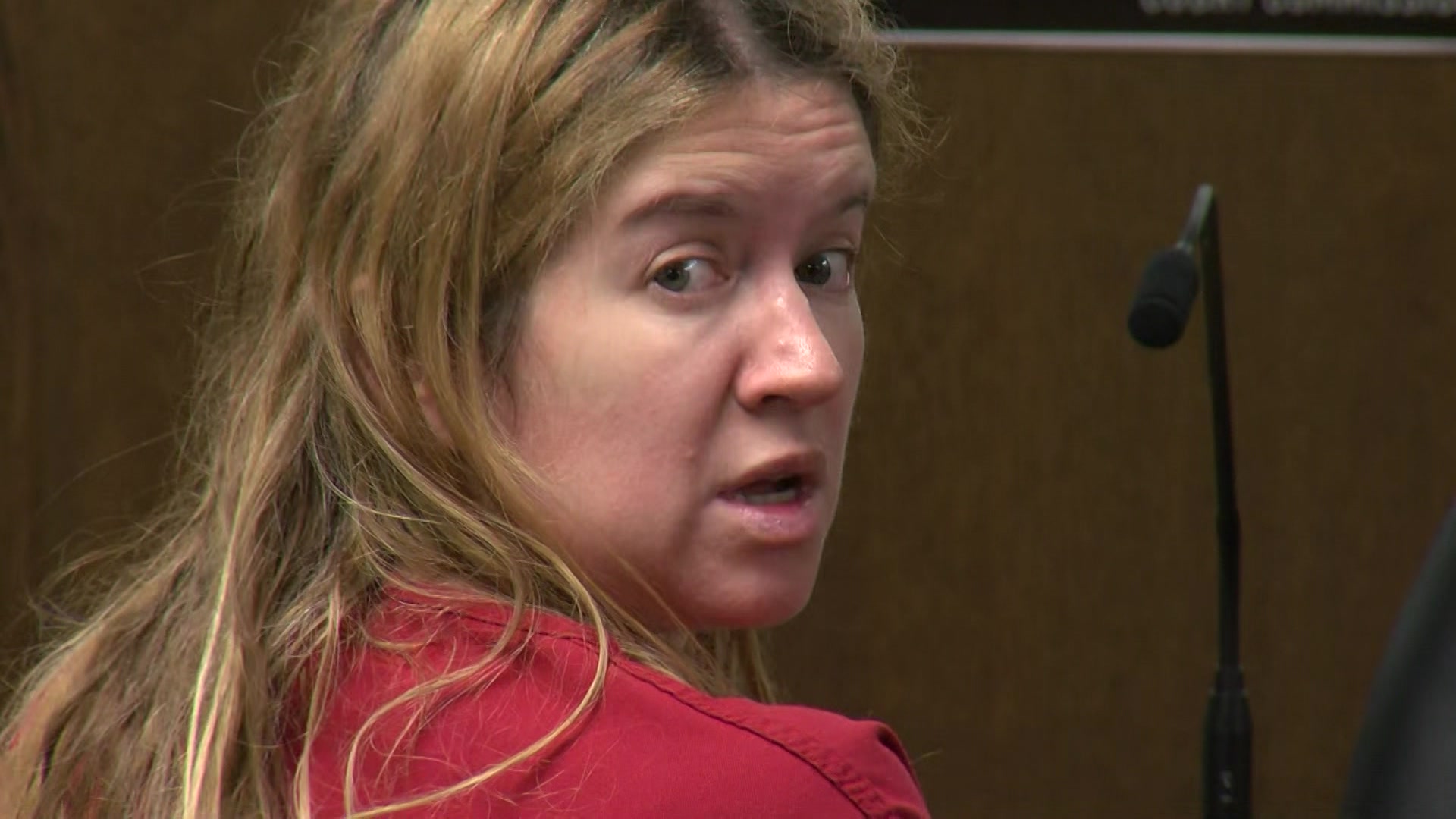 According to the complaint, Hitchcock told the detective she felt like she had no other choice but to take her life. She allegedly said that she thought to herself that if she was going to take her life she wondered what was going to happen to her kids. She expressed a worry that if she killed herself she did not want her kids to be abused and that was when she thought to herself she was going to, “end his suffering with my hands.”

Hitchcock reportedly added she did not want Oliver to be abused for years in front of screens by a bunch of people that were going to watch him being abused.

Hitchcock allegedly stated she tried to convince herself that all of it was not true and that it was just in her head. She said that her husband even stayed home from work to stay with her to support her, but she did not feel supported.

According to the complaint, Hitchcock was asked if she ever tried to hurt her 11-year-old child. She reportedly said she, "kind of dipped him in the water" during a bath. She allegedly said she told both boys they needed to wake up and see what was going on around them. She reportedly stated she did not want to end the 11-year-old's life by dunking him underneath the bath water; she just want to scare him. She said she dunked his head under the water to scare him so that he would understand his life was in danger.

The 11-year-old boy was interviewed and he talked about the incident in the bathtub. He allegedly said his mother asked him to put his head under the water to see how long he could stay under. He said after he went under the water, he felt his mother's hands on his head, pushing him down and at some point it felt like her whole body was pushing him down. He reportedly said he was able to get out from underneath her so she had not been keeping him under the water. The 11-year-old told officials he eventually left the bathroom and his mother was near the kitchen holding a big knife. He allegedly said he started screaming at her and tried to stay away from her. He told officials his mother put the knife away and hugged him and that the rest of their day went on as normal.

The 11-year-old boy allegedly stated to detectives his mother did not want him to have a bad death and she tried to kill him by giving them a "peaceful death."

On April 1, while at the Sheboygan County Jail, authorities informed Hitchcock Oliver had passed away. Hitchcock reportedly paused for a moment and then in a calm tone said, "well, I guess I accomplished what I set out to do then."

In court on Tuesday, April 5, Hitchcock looked back at her family several times in court and at one point apologized.

In court today for Natalia Hitchcock
She’s charged with First Degree Intentional Homicide in the death of her 8 y/o son Oliver. On the way out the courtroom she apologized to her husband. pic.twitter.com/xnsVZYiYue

Hitchcock's bond was set at $1 million. If convicted, she could face life in prison.