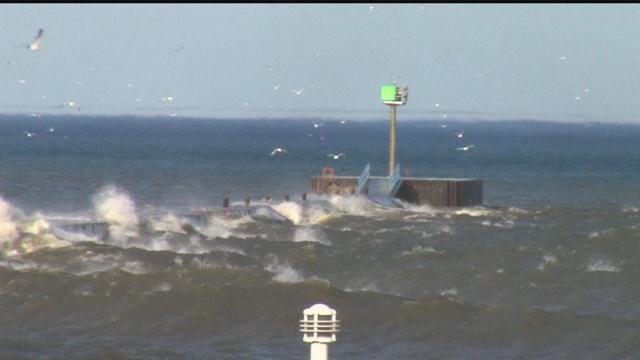 Two bodies pulled from Lake Michigan Monday, but one local alderman tell us this could have all been prevented if the city had put in safety measures he suggested years ago.

Timmons says when the weathers good people flock to the pier heads by Lake Michigan, not realizing how dangerous it really is.

"With the waves crashing around it, there's sea spray that can make it more slippery. And also just the weather here can turn on a dime and when you see waves crashing over just know that its going to make the conditions out there more hazardous," said Timmons.

He tells us the only safety precaution is this emergency call box, all the way at the beginning of the pier; a far distance from the end of the dock where three young men were swept into Lake Michigan by a wave on Sunday.

But its not the first time.

"In 2008 there were a couple drownings off the pier in Sheboygan and I proposed that the city should put life rings on the pier to help people that did wind up in the water somehow," said Alderman Scott Lewandoske.

Lewandoske's suggestion made front page news in the Sheboygan Press in December of 2008, but he says-the former mayor and city administrator shut the idea down.

"They told me part of the pier is in the city of Sheboygan, the other is in the county. They said if we put in life rings we have to contact the DNR. ..
They said as long as you're not putting anything in the water, you can put life rings on the piers," said Lewandoske.

In light of recent tragedies and with new leadership in place, Lewandoske is hopeful changes will be made by next spring.
But in the meantime-Timmons wants to let the community know just how risky it is to walk these piers.

"You could be the strongest swimmer in the world but with the water temperatures they way they are in Lake Michigan, that initial shock actor can get you," he said.