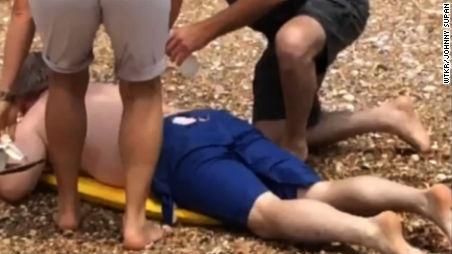 (CNN) At least five reported shark attacks this month have swimmers proceeding with caution as they head to coastal beaches in North and South Carolina.

In the latest incident, a beach outing in North Carolina took a harrowing turn Saturday afternoon when a 17-year-old boy was attacked by a shark.

The teenager was swimming with several other people near Waves, North Carolina, when the shark attacked. The teen received various injuries to his right calf, buttocks and both hands, according to a news release posted to the FaceBook page of the Cape Hatteras National Seashore. No other swimmers were injured.

Ocean Rescue Squad paramedics and National Park Service Rangers rushed to the scene in response to a 911 call about an injured person on the beach. The teen was treated at the scene and then transported by lifeflight to Norfolk, Virginia, for further care.

A 47-year-old man was injured in a separate shark attack in the same area Friday morning. The National Park Service says that attack took place about a mile north of a fishing pier in Avon, North Carolina. The victim had been swimming with others when the attack happened. He was bitten on his right leg and lower back. Hatteras Island Rescue Squad paramedics and National Park Service Rangers treated him at the scene before he was transported by ambulance and airflight to Norfolk as well. No other swimmers were injured in that incident.

In South Carolina, a shark attack also took place Friday morning at Hunting Island State Park, according to the Lady's Island St. Helena Fire District. The male victim was taken to Beaufort Memorial Hospital for treatment. No further information was available about the victim or the extent of his injuries.

At least two other children have been attacked by sharks along North Carolina's coast in the past two weeks. A 13-year-old girl and a 16-year-old boy both lost an arm in attacks about 90 minutes apart at Oak Island, North Carolina on June 14.